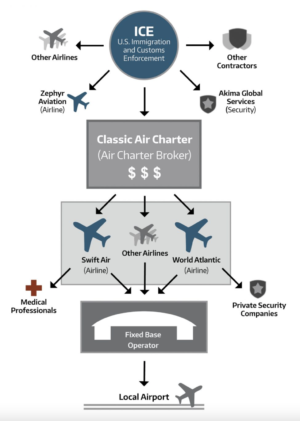 The company that has the current contract is Classic Air Charter. For managing ICE Air Operations from October 2017 through the end of September 2022, CAC’s contract is potentially worth $739 million. Classic Air Charters doesn’t actually fly the planes either - that would be too easy. No, CAC subcontracts with other carriers to operate deportation flights. The company that flies 95% of ICE Air flights this year is iAero (formerly Swift Air). Starting in August, ICE began flying too many flights for iAero to manage, and so World Atlantic Airlines was brought back in.

Despite having this system in place, when the Biden administration made the decision to deport thousands of Haitians beginning in mid-September this year, they gave a $15.76 million, no bid contract to the GEO Group to manage the flights.

The GEO Group is a massive government contractor that runs many of Immigration and Customs Enforcement’s detention facilities. They also oversee much of ICE’s Alternatives to Detention program (ankle monitors). If someone is given an ankle monitor, they are probably checking in with a GEO group office - not ICE. Crazy system. The GEO Group reported $1.14 billion in income through the first half of 2021.

The one thing GEO group does not do for ICE is fly planes. At least, not until September.

Like Classic Air Charters, the GEO group did not actually fly any of these planes themselves. They subcontracted with iAero, World Atlantic, Global Crossings Airlines, and Eastern Airlines (note: this is not your parents’ Eastern Airlines, but a much smaller regional carrier operating in the Caribbean).  Between September 19 and October 7, there were 70 removal flights to Haiti involving about 7,600 people. At least 64 of these flights were under the GEO Group contract.

At the contracted rate, the GEO Group is receiving $179,000 per flight, or about $1,700 per person deported. This comes to at least $11.4 million so far. How much of that they turn over to the subcontractors is not clear. A typical ICE Air flight to Haiti would pay out $68,000 to contractors, at least at ICE Air’s published flight hour rate of $8,577 (assuming they also pay for the, usually empty, return flight).

The dirty little secret of immigration policy is that private corporations make a lot of money engaging in this mandated cruelty. The GEO Group typically makes hundreds of millions of dollars every year in immigrant detention contracts, for example. And they get paid even when the beds are empty, due to guaranteed minimums written into their contracts. Which is to say, the story here is not that some company made money off of deporting people. That sadly happens every day with multiple flights to countries all over the world.

The question here is why ICE is paying the GEO Group to do what they are already paying Classic Air Charters to do, but at something close to 3X the rate? The answer can't be that CAC was over capacity, as the GEO Group is basically using the same subcontractors CAC would have. And the GEO Group has no public history of managing deportation flights for ICE. The only thing different about these flights is that they are not departing from traditional ICE Air hubs, but from airports in Laredo and Harlingen, Texas. That said, both airports are part of ICE's network - and even if not common staging areas for international flights, they have been used for this purpose before.

So, the GEO Group is getting paid because they are a large, well connected company. Absent some compelling inside scoop suggesting otherwise, this is the only reason. Congress should be asking for more detail about this transaction.

Thanks Tom, for researching and writing about this. It certainly brings up questions.