The migration crisis in southern Mexico boils over, US policy is making things worse

“What is happening is that human rights are being violated here, refugees are people who left their country because of threats. If we are here it is because we are looking for a better life. People who have papers- they can not take them, put them on a bus and take them to Guatemala, that is a violation of human rights. There are people who have one-year visitor cards, who have residency, who have a document that says Tapachula, Chiapas, those same people are grabbed and taken to Guatemala. That should not be, that is racism, that is a violation of human rights, that is why we are fighting. The caravan is for that, even though we spent a week demonstrating all day, so that we can move around and look for work, because we have to pay for a house, we have to eat, and there are people who are sleeping in the park and are looking for work all day in the rain. Women with children, pregnant women. [...] the caravan is because they don't want to make a decision with us. [...] We are looking for a way to get out of Chiapas because in Chiapas there is no way to live because people are treating you like animals, your rights are being violated. So if we are refugees we are fighting so that we can get out and looking for a way to live so that we can eat. " Haitian migrant statement to the Colectivo de Observación y Monitoreo de Derechos Humanos en el Sureste Méxicano

Over the past several weeks the situation for Haitians and other migrants in southern Mexico has reached crisis proportions. Last week Haitians, many of whom had been stuck in Tapachula, Chiapas for over a year, launched protests in front of Siglo XXI, Latin America’s largest immigrant detention center. On Saturday hundreds of Haitians, joined by others from Venezuela, Central America, and Africa, left Tapachula in a caravan. Motivations varied. Many expressed the intent to reach Mexico City in the hopes of accelerating their asylum cases, and for others, the goal was simply getting out of Tapachula.

The caravan has repeatedly been met with violence from the INM and from Mexico’s recently (2019) formed National Guard.

Saturday, the caravan left Tapachula with people walking 41 kilometers northwest to Huixtla. Along the way, some members of the caravan were beaten and arrested. In an interesting article juxtaposing the treatment of Haitian and Central American migrants with the reception given to Afghan refugees also arriving on Saturday, Vice News reporters spoke with a few of the people whose attacks by INM appeared in cell phone footage circulating on social media.

“If we stay here, we are going to die of hunger, and we will be sleeping on the street,” Theoburn Derino….told VICE World News. He fled Haiti because of violence and political conflict, and had spent a month in Tapachula before trying to make his way to Mexico City. “I just want to find a place where I can work, and where my daughter can sleep peacefully.”

INM issued a press release condemning some of the actions that had been caught on film. But the attacks did not stop.

Sunday, the caravan continued from Huixtla to Escuintla, and then onto Mapastepec. Along the road near Sesecapa, anti-riot trucks and INM busses were spotted. Then around 3:00 p.m. on the road section between Ruiz Cortínez and Mapstepec, an anti-riot team from the National Guard was mobilized alongside elements of INM and attempted to trap the caravan between temporary fencing. About half were arrested. Some of those who made it to Mapastepec were attacked Tuesday morning, arrested and detained. From Colectivo de Observación y Monitoreo de Derechos Humanos en el Sureste Méxicano (COMDHSM):

In less than 20 minutes, they dismantled the small camp. Those who were not detained sought shelter in houses, premises and the Catholic Church; the elements of GN and INM followed them and, in some cases, entered to apprehend them. Approximately 80% of the people in this group were apprehended, leaving their belongings behind and without knowing their whereabouts.

While the INM was beating and arresting refugees in Mapastepec, the government was proposing establishing “humanitarian camps” for Haitian migrants, and trying to enlist the support of the church office on migration - which opposes this.  The Dimensión Episcopal de Pastoral de la Movilidad Humana (DEPMH) of the Episcopal Conference of Mexico is calling instead for the regularization of migrant status, and respecting their freedom of mobility. Likewise COMDHSM is demanding that the government respect the rights of migrants, and provide humanitarian support. In their statement issued on September 1, 2021, they write:

Underlying the crisis is ongoing pressure from the Biden administration on Mexico, as well as countries in Central America, to stop as many migrants from reaching the US/Mexico border as possible. This, coupled with the Biden administration’s new strategy of expelling Central Americans and others via plane to Tapachula and Villahermos under Title 42, most of whom eventually end up being expelled by INM to Guatemala, has created a humanitarian disaster in southern Mexico.

Indeed, the mobilizations over the last week by Hatiain migrants was the result of Haitians with asylum claims pending in Mexico being removed to Guatemala anyway amidst this new wave of expulsions.

The Mexican government has a backlog of 80,000 asylum claims. The government is being pushed by the United States to limit mobility in order to keep people in Mexico, while also being pressed by a dramatic increase in the numbers of people migrating north as the result of a combination of ongoing political instability and COVID-19 induced economic recession. The result of all of this is that people are forced to wait in cramped, unsanitary conditions for months, and for some over a year. 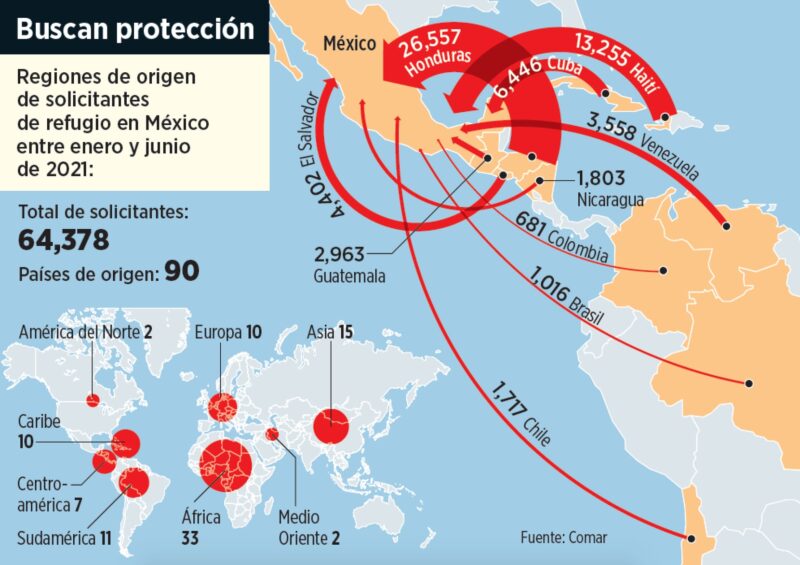 Haitians now make up the second largest group of people seeking asylum in Mexico. Only Hondurans have a higher number of claims. Yet, much like in the United States, Haitian claims to asylum in Mexico are denied at a much higher rate than other countries. It is creating an untenable situation for people - who are clearly now desperate to leave Tapachula.

We certainly join in the call for the Mexican government to stop the violence against migrants, and to establish an alternative path for people to regularize migration status. However, we equally denounce the Biden administration’s ongoing support for Title 42 expulsions, the new policy of removals to southern Mexico, and ongoing pressure this administration has asserted on countries from Mexico to Colombia, to detain migrants on their journey north. The administration’s stated goal of creating a “Collaborative Migration Management Strategy” with countries in Central America and Mexico is currently looking more like a coordinated war on migrants than an effort to instill collaborative and humane policy processes.

[…] in Tapachula while waiting for COMAR to decide their fates, people frustrated by these obstacles launched a series of caravans in August and early September, some with the goal of reaching Mexico City in […]