From the Archive: Bill and Maureen Testify before Congress (1987)

Over the weekend, I stumbled across a C-Span clip of Maureen Fiedler and Bill Callahan testifying before Congress about the U.S. embargo against Nicaragua and humanitarian aid shipments.

You can watch (or skim) the entire hearing on C-Span here.  A clip of Bill and Maureen's testimony is can be viewed by clicking on the image below. 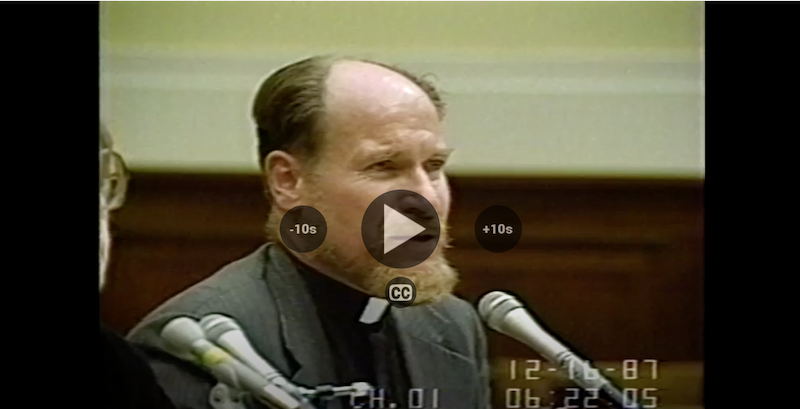 A little bit of context: In 1985 the United States launched an embargo against Nicaragua as part of its broader effort to destroy the Sandinista revolution. The Quixote Center began humanitarian aid shipments to Nicaragua in 1983 (following the CIA bombing of the Nicaraguan port at Corinto) and continued to ship to Nicaragua despite the embargo. For this, the Quixote Center was investigated by U.S. Customs in 1986. Though hassled, the shipments were never halted, as they met the humanitarian exceptions written into the embargo order.

It was also in 1985 that Congress agreed to fund the Contras, after years of denying this request. The FY1986 appropriation was $30 million and contained some restrictions on CIA and Department of Defense support for the opposition in Nicaragua. In 1987 appropriations expanded to $100 million, and though some funds were designated for "humanitarian aid" to the Contras, military assistance was approved.

At the time this testimony was taking place, the campaign was at its peak. Bill, who tracked assistance from the Quixote Center and other grassroots organizations as the coordinator of the “National Tally” was just back from one of his many trips to Nicaragua when he testified. That year, Bill was able to document $100 million in humanitarian assistance raised for the people of Nicaragua, matching funds appropriated by Congress for the Contras in FY1987.

While all of this seems ancient history, the United States government is once again leveling sanctions against Nicaragua in an effort to remove a Sandinista government. Though the scale of the current U.S. effort is small compared to the 1980s, and the contexts are quite different, it is nevertheless useful to remind ourselves of the sense of entitlement the United States government feels in shaping political outcomes in Central America - an entitlement it has exercised for decades with deadly results. At the Quixote Center we continue to oppose all sanctions and other forms of U.S. intervention in Nicaragua. It is the one consistent feature of our work for last 38 years.

Excellent history! We need to make sure all this is archived!