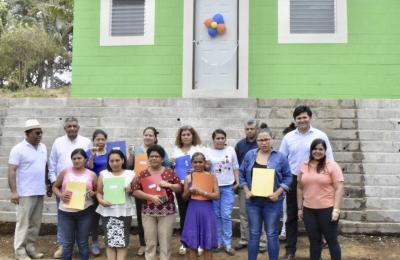 On Saturday, May 4, twelve families who are members of the Cooperativa Fuentes de Agua Viva (COVIAMFAV) of San Marcos were able to move into their new homes. "This is a miracle," said Pastor Anibal Chavarria, president of COVIAMFAM.

The cooperative was created in January 2014 and in 2015 was able to purchase land for up to 20 houses. Once in possession of the land, they searched tirelessly for financing, but were unable to find a bank willing to work with them. Several people resigned in frustration.

The construction process with COVIAMFAV has been difficult. The terrain is very hilly so several improvements had to be carried out before starting the construction of the houses including creating terraces for the homes.

Kenneth García is an engineer working with the Institute and oversees all of the construction sites. Mr. García explained that he had to design a new model home that would meet the requirements of families. The result was the Sapphire model of 57m2, an austere and more economical model than the 42m2 model that was originally created for this project.

Liliet López, another Institute engineer, who was in charge of the supervision of the work during the four months, stressed that the biggest obstacle was the topography of the land and the need to create varying levels for each lot. Engineer Lopez pointed out that with this project four contractors were employed, who had several squads of workers, for a total of 50 people employed during construction. Members of the cooperative also helped work on the project.

"We had 50 workers working from Monday to Saturday and days of mutual aid by members of the cooperative on Sundays".

Of the 12 members who received their housing, 11 are women who struggle daily to get ahead with their family. Silvia Dávila, member who received her house, with tears in her eyes expressed her gratitude to the Institute of John XXIII (Roncalli Association) for believing in the cooperative and giving them the opportunity to have a decent home. "One of the things we learned in this project was patience and working together. We had the land, but not the money for housing. Thanks to the association our children will have their space. Most of us are women, heads of family. I longed to have my house, and today is the day they give us the key, the beginning was difficult, but God is just."

"I am very grateful we have persevered" were the words of Martha Lucía Galeano, 38 years old, a member of the cooperative, who received her house and who has a bakery as a means of subsistence. "When I arrived, I listened to the desire to have a home and in this cooperative we were given space as working women".

Another member who received her home was 39-year-old Jeaneth Bonilla. She expressed the happiness of receiving her home. "I come to thank God for this blessing and all those involved in this project, the cooperative and the Roncalli Association that helped us make this dream come true," said Mrs. Jeaneth.

On behalf of the Institute of John XXIII, Roncalli Association, the director Edwin Novoa, also expressed his satisfaction at the completion of these 12 homes. "All this work is the product of faith, will and relationships. It has been a collective work, which has required the will of public authorities and families. But we are still missing eight homes and we have the commitment to build them, this is just beginning ."

Edwin also encouraged the members to support the board of the cooperative and encouraged them to plant trees to give the soil consistency. Likewise, he recognized the engineers, construction masters and local authorities for all the support and effort.

For the development of this project, the support of the mayor’s office of San Marcos was indispensable. Mayor Linda Tellez acknowledged the accompaniment provided by the Institute of John XXIII to the cooperative and thanked Pastor Aníbal for making the mayor participate in this project.

The celebration of the delivery of the homes concluded with the handing over of the keys to their home to the 12 members who were very happy.