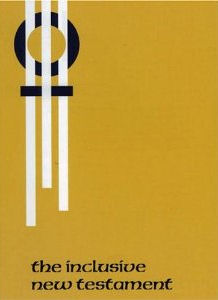 As a member of the original National Council of Churches Inclusive Language Lectionary Committee that produced the three-volume An Inclusive Language Lectionary: Readings for Years A, B, and C, I was aware that a subgoup of my former colleagues was at work on The New Testament and Psalms: An Inclusive Version, recently published by Oxford University Press. So when I heard about The Inclusive New Testament, published in 1994 by the Priests for Equality, I thought: it figures–replication of feasts after centuries of famine. Now we have competing versions, where before we had nothing at all!

But having pondered both versions, I have felt my dismay turn to gratitude. Feminists who work closely with the Bible will need a copy of both versions; all others will have a choice in which they cannot go far wrong.

The goal of the Priests for Equality was to give to the English-speaking world a New Testament that would be “accessible to everyone, particularly to those who have felt that sexist language creates an uncomfortable (and, at times, insurmountable) barrier to their devotional life.” They have reached their goal with admirable grace.

Since it is impossible to overview the entire New Testament in a relatively brief essay, I will speak only about a few passages that have been part of my personal oppression and then, when understood inclusively, my liberation from that oppression.

Here, for instance, is what the Priests for Equality have done with Ephesians 5:21-22: “Defer to one another out of reverence for Christ. Those of you who are in committed relationships should yield to each other as if to Christ. . . .”

Not only is the appearance of one-way submission corrected in a way that is actually more in line with the Greek text, but the insights are made accessible to people in nontraditional relationships. In fact, the Priests for Equality frequently use the word partner where the Oxford version sticks to the more traditional husband and wife–so that in that sense, the Priests for Equality have achieved a degree of inclusiveness that surpasses the inclusiveness of the Oxford New Testament and for which we lesbian and gay people, among others, are profoundly grateful.

Along the same line, the Priests for Equality’s rendering of 1 Corinthians 6:9-11 could not easily be misused as other translations have been. “. . . no fornicators, idolaters, adulterers, hustlers, pederasts, thieves, misers, drunkards, slanderers or extortionists will inherit God’s kindom. And such were some of you! But you have been washed. . . .” The emphasis is clearly on sexual and non-sexual abuses: and the reign of God is described, both here and elsewhere, by the communal and gender-inclusive term kindom, rather than kingdom.

Acknowledging that according to the extensive grassroots feedback they utilized, the top priority was the inclusive naming of God, the Priests for Equality have used such terms as Our God,, Almighty, or Sovereign. Jesus is called Firstborn or only Begotten rather than “son.”

“Son of Man” becomes Chosen One or Promised One. (In these cases, I prefer the Oxford version’s Child and Human One, chiefly because so many children are abused or marginalized because being human is too often undervalued, especially by the Religious Right.

Those who have winced at the misogyny of expressions like “the whore of Babylon” will see Good News in the rendering of Revelation 17:5, which describes the scarlet beast covered with blasphemous names. “This cryptic name was written on its forehead: Babylon the Great, Source of All Idolatry and of the Abominations of the Earth.” Instead of promulgating myths of specifically female-associated evil, the Priests for Equality have struck through that mask to the underlying meaning of idolatry, cultic practices, economic excesses, and debauchery.

The intention of the Priests for Equality was to make The Inclusive New Testament truly inclusive by focusing “on those whom society has marginalized: women, ethnic and racial minorities, lesbians and gay people, and those typecast in terms of their afflictions” (Introduction, p. xx). “We do not identify people as their afflictions, impoverishments or infirmities,” they write. “We do not refer to ‘the poor.’ but rather ‘poorer people’ or ‘people in need” –to show that poverty is not an absolute, easily delineated category of people, but a relative condition that touches everyone.” A person afflicted with leprosy is not called “a leper” but rather “ a person with leprosy” (p.xvii).

(Interestingly, the scholars who produced the Oxford version not only make the same point in their introduction but emphasize that such a translation is a more accurate rendering of the original Greek.)

The Inclusive New Testament features a readable and welcoming layout and typeface, an informative introduction and acknowledgments, and a helpful pronunciation guide. At $19.95 [the 1996 price], it’s an excellent buy; at the special offer of two copies of $29.95, it’s a steal.

Virginia Ramey Mollenkott is Professor of English of William Paterson College of New Jersey and is the author of numerous books, including Women, Men, and the Bible, and Sensuous Spirituality: Out from Fundamentalism.

Today I received "The Inclusive Bible". I am impressed so far with some brief checks. Why, for example is "kataluma" in Lk 22:11 translated as "guest room", while in Lk 2:7 it is rendered as "inn"? If it were translated as "guest room" in the infancy narrative, the scene would have a quite different tone. I suspect that the traditional "inn" betrays lack of hospitality and perhaps a bit of anti-semitism.