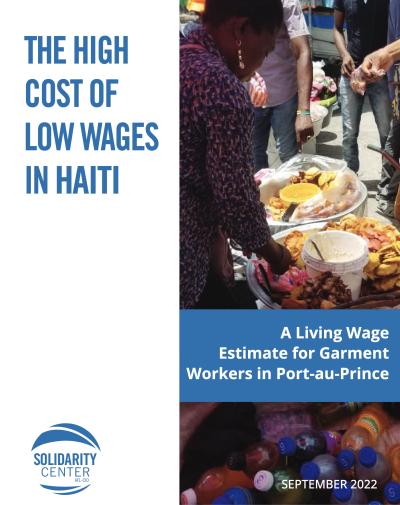 The AFL-CIO’s Solidarity Center just released their latest living wage study for Haiti, The High Cost of Low Wages, with a particular emphasis on wages and conditions for garment workers. The garment sector employs close to 58,000 workers, 63% of whom are women. There are industrial parks in Ouanaminthe and Caracol, as well as multiple factories in Port au Prince located near the airport. Most of the clothing produced in these factories is sewn for US brands and comes to the United States.

The results of the study are not surprising. Haitian garment workers are making less than one fourth of a living wage.

Based on a series of interviews with workers, and merchants, the study documents the costs of a basic food basket, clothing, fuel, transport, health care expenses, housing, and education costs. They determine the minimum costs of meeting these household needs to be 90,928.51 Haitain Gourde (HG) a month. The current minimum wage in the garment sector is 685 HG a day based on a 6 day work week, which comes to 17,602 HG a month.

To get a fuller picture of what this means, I revisited these figures through the lens of labor time; how long do people have to work to earn a living, e.g, to live.

For example, the basic food basket used in the Solidarity Center study comes to 35,990.24 HG each month. At the current minimum wage (685HG) it would take a garment worker 420 hours to earn this much money – assuming an 8 hour day, which is not necessarily a safe assumption

Put another way, a garment worker would have to work at least 8.75 weeks to earn the money needed to feed themselves and their family a decent diet for a month. Which is impossible.

Add in shelter, transport to work, basic medical needs, education expenses for children, clothing, fuel costs for cooking, and workers need to work 1062 hours, or 22 weeks at the current wage, to meet these expenses for a month.

The impossibility of this is clear. What this means is that people go without health care, and sufficient calories. They also have to share their housing with multiple people, and possibly rely on NGO support to get their kids to school. Even then they are barely scraping by despite having a full time job requiring them to work 48 hours a week (minimum).

Could the factories pay more? Of course…

The Haitian Gourdes has fallen dramatically against the dollar since the earlier wage benefits were won back in February. On February 2, 2022, the Gourde was trading 101HG  to 1 US dollar. At that rate, the 685 HG daily wage came to $6.78.

On August 22, 2022,  the gourde was trading at 129 HG to 1 US dollar. At this rate the same daily wage came to $5.31. The gourde has bounced back some over the last week, but the wages in dollar terms are still well below what they were when the raise first went into effect.

Of course, the garment companies get paid in US dollars for the clothes they sew. They pay their workers in Haitian gourdes. As the gourde falls against the dollar, they make more money. This is not accidental.

In the United States the monthly minimum wage for a garment worker is $1,160, or $7.25 an hour (the federal minimum wage). This is well below a living wage in the United States as well. The cost of housing and so on varies pretty dramatically across geographies in the US, but taking a national average, garment workers are making 70% of the local living wage – though in most cases probably significantly less. Of course, competing with $0.70 an hour makes it unlikely they will get a raise any time soon.

US policy makers, business leaders and others, even the well meaning, will point to garment jobs in Haiti and note they are relatively high paying jobs in the local economy. Policies are put into place as though the companies are doing Haitians a favor by locating there. The companies are granted low tax rates, pay zero export fees, and even garner public financial support to build out their facilities and connect to local infrastructure.

In reality, the garment companies are making profits by stealing the life of Haitians, one hour at a time.

The Solidarity Center’s recommendations include raising the minimum wage to a living wage; ensuring the workers can organize; making sure workers pick their representatives for the Superior Council of Wages; and pressing companies and/or the government to provide transportation subsidies for workers.

You can read the full Solidarity Center study, the High Cost of Low Wages, and their complete set of recommendations here.