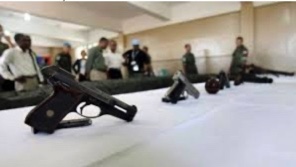 Guns handed in at the start of a disarmament, demobilisation and reintegration program in Port au Prince 2017 (Photo: Sophia Paris/UN Photo, Creative Commons)

The notorious paramilitaries of the past, the Tonton Macoute and FRAPH may be gone today, but the people of Haiti are once again under the threat of the presence of armed groups acting with impunity.  The use of armed gangs by political actors in Haiti (and many other places, including the U.S.) to “keep order” is hardly a new phenomenon. However, over the last several years, as protests against the PHTK government have grown, these gangs have been mobilized in what seems a coordinated fashion. They are heavily armed, and have engaged in multiple attacks on communities.

At the moment, the spotlight is on former police officer Jimmy “Barbecue” Cherizier, who now fronts a gang confederation (the G9) that rules the Port-au-Prince neighborhoods of Delmas and Bel Aire. As a police officer, Cherizier was implicated in massacres at Grand Ravine and La Saline.

At Grand Ravine, in November of 2017, police attacked community members inside a school - killing 9 people. Some were killed execution style, and several appeared to have been shot in their homes nearby and then dragged to the school. The operation was supposedly launched by police in response to gang activity, but was clearly more complicated than that. UN units were present but did not intervene. The massacre was largely ignored outside of Haiti. In U.S. media, only Jake Johnston of Center for Economic and Policy Research covered the story in detail - in a piece published in the Intercept in January of 2018.  Johnston interviewed, Rovelsond Apollon, an observer with a local human rights organization working in Grand Ravine, who discussed the connection between the police, politicians and local gangs:

It’s not just that politicians exert control over the police, Apollon said — they are involved with the gangs themselves. His organization has interviewed young people with heavy weaponry that is not easy to acquire, he explained, and they said the weapons had been provided by politicians. “Politicians and authorities are not innocent in what happened, because they, too, play their part in the violence,” he said. The politicians, for their part, have not publicly addressed these accusations.

A year later, the neighborhood of La Saline became the sight of another massacre.  As in Grand Ravine, initial reports made the attack seem like an internecine battle between gangs trying to control the area. But further investigation laid out the role of the police who coordinated with gangs, allegedly operating with the support of Moise allies. It is now argued that the motivation for the attack on the community was at least in part retaliation for its mobilization in protests against the current government. According to a report on the attack following a Haiti Action Committee and National Lawyers Guild delegation, Cherizier publicly admitted taking part in the attack, with his police units blocking roads to keep people from leaving the community. The total number of people killed is not known. Many bodies were burned, some left in the street where remains were eaten by pigs and dogs. The Réseau National de Défense des Droits Humains (RNNHD) was able to identify at least 71 people murdered based on interviews with community members.

Cherizier was forced out of the police in December of 2018. However, rather than end up in jail, Cherizier has re-emerged  at the head of the G9, a confederation assembled with the support of the current government. Journalist Etant Dupain wrote last week:

During an explosive radio interview on Radio Magik9, earlier this month, one of the most influential members of President Jovenel Moise’s commission for disarmament (known as the CNDDR), Jean Rebel Dorcénat, stated that it was his idea for several gang leaders to join together to form a federation, which has now become the gang named G9. He later walked back the statement, and clarified to say that he was not responsible for creating the G9, but he did, however, advise gang leaders to form an alliance in order to make the disarmament commission’s job easier.

When the alliance was announced, armed groups rallied in Port-au-Prince. The police were nowhere to be found - but their equipment was on display. The Washington Post reported, “When Cherizier’s men took to the streets in June, witnesses claimed to have seen them ride in the same armored vehicles used by the national police and special security forces. Justice Minister Lucmane Delile denounced the gangs and ordered the national police to pursue them; within hours, Moïse fired him.”

Dupain’s article was written in the context of the G9 engaging in massive attacks against the community in Bel Air over the last two weeks.  These attacks have displaced thousands of people, many of whom are now living in a soccer field in Solino.  Cherizier is not hiding - indeed, he regularly appears in the streets, and moves freely despite an active arrest warrant.

Meanwhile, members of the national police have violently protested the arrest of police captain Pascal Alexandre, driving through Port-au-Prince setting cars afire, and even torching the office that archives voter registrations. This so-called Fantom 509 force has become a frightening presence in the capital, and remains unchallenged by Moise and his allies.

For his part, Moise has responded to the moment by trying to consolidate his position. Ruling by decree since January - there are only 11 elected officials serving in office in Haiti right now - he has pressed forward with an electoral commission and set of constitutional reforms that would strengthen the presidency. The electoral commission is devoid of the usual representatives of civil society, and has been denounced by the opposition. Three weeks ago, the head of Haiti’s Port-au-Prince bar association, Monferrier Dorval, was assassinated in front of his home just hours after giving a radio interview in which he expressed doubts about constitutional reforms being proposed by the government.

Into this setting the U.S. State Department has entered with the kind of patronizing rhetoric and threats we have come to expect. A State Department official stated “Frankly, I have to say I’m a little bit tired of every group, every opposition party in Haiti saying, ‘Well, I won’t appoint my person,’ or ‘We won’t have an election,’ or ‘We won’t run in this until you meet all of my political demands...That’s not democracy. And so we are quite insistent on this, and it’s going to start to have consequences for those who stand in the way of it.” So, the U.S. government’s position is that the opposition must allow the PHTK and Moise to consolidate its power, “or else.” The U.S. government, it is worth noting, is the chief bankroll behind Haiti’s national police:

Earlier this month, the State Department notified Congress that it was reallocating $8 million from last year’s budget to support the HNP. Since Trump took office, the US has nearly quadrupled its support to Haiti’s police — from $2.8 million in 2016 to more than $12.4 million last year. With the recent reallocation, the figure this year will likely be even higher. US funding for the Haitian police constitutes more than 10 percent of the institution’s overall budget.

So, as thousands come to the street with vision, with hope, and, for some, in desperation, demanding a revolution of political and economic forces, they face not just the local bourgeoisie and their armed defenders, but the U.S. government, with it’s bankroll, weapons and saccharine imperial pronouncements about good government.  Pierre Esperance of the RNNDH told Etant Dupain, “The worst part is that the international community continues to support a government that is in bed with gangs and is responsible for nine massacres in the country. I have not seen anything like it since the departure of Jean Claude Duvalier.”

Finally, responding to the State Department, Bob Maguire said, “This thing about ‘It’s going to have consequences for those who stand in the way,’ well, it already has consequences….They are getting shot. They are getting beat up and they’ve been demonstrating in the streets for years about the lack of any kind of responsible democracy in the country. These are people who are already suffering the consequences of Haiti’s failure.”  This failure is bought and paid for by the U.S. government.