Out of Many, One: The Fine Art of Immigration Policy 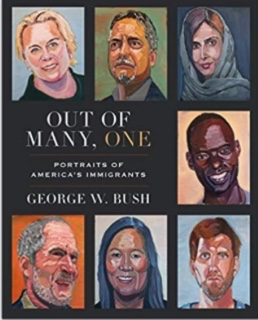 In his retirement, former president George W. Bush has famously taken up painting. His first collection was titled “Portraits of Courage, a collection of oil paintings and stories honoring the sacrifice of America’s military veterans.” His latest work is titled Out of Many, One and is a series of portraits of people who have immigrated to the United States. In an article published in the Washington Post, Bush writes that he had two goals for this series: “to share some portraits of immigrants, each with a remarkable story I try to tell, and to humanize the debate on immigration and reform.”

In the Post article, Bush says he’ll leave specific immigration policies to current political leaders. But then goes on to outline exactly what he thinks should be done in 6 parts. Let’s take a look at each of his ideas.

He closes by saying “Over the years, our instincts have always tended toward fairness and generosity. The reward has been generations of grateful, hard-working, self-reliant, patriotic Americans who came here by choice. If we trust those instincts in the current debate, then bipartisan reform is possible. And we will again see immigration for what it is: not a problem and source of discord, but a great and defining asset of the United States.”

Wait — since when have our instincts tended toward fairness and generosity? The Chinese Exclusion Act? Ethnicity-based quota systems? In an excerpt from the book, Bush acknowledges the racist, biased history of our immigration system. But based on this article, he seems to have forgotten. If we trust our instincts we will end up right where we started. But I’ll agree with Dub-ya on one thing. Immigration is a “great and defining asset of the United States.” So let’s start there and build a new system actually built with fairness and generosity.