On a brisk Tuesday morning, across from the white dome of the U.S. Capitol, a group of five women from Central America gathered to bring awareness to the hundreds of migrants who disappear each year while attempting to cross into the United States. Dressed in shawls and cute jackets, hair impeccably styled, any one of them could have been one of my tías, or my abuelita. Despite the October cold, the mothers stood tall—heads lifted high—as they recounted their stories.

“We are dying while alive. We have no peace, day and night we hold them in our hearts, and our only desire is to find them,” said Arecely de Mejía, a member of the Committee for Family members of Deceased and Disappeared Migrants (COFAMIDE) whose son Edwin has been missing for over nine years.

“I am the mother of Carlos Osorio Parada,” said Bertila Parada from El Salvador. “I did find him, but I did not find him the way I wanted to. I was not able to hold him. My son left with the hope of coming to this country, and he was kidnapped in Mexico. His body was found in a clandestine grave in Tamaulipas in 2011. He was finally repatriated in 2015 to El Salvador."

“We want to open borders so that you can see the suffering of mothers of disappeared people in our countries,” said Ángela Lacayo from Honduras. “Our youth are forced to migrate because of crime, because of lack of opportunity, because of unemployment, because of organized crime, because of M-18. We want to be heard and for our voices may make it to the halls of Congress so that laws can change and the militarization of migratory routes ceases.” 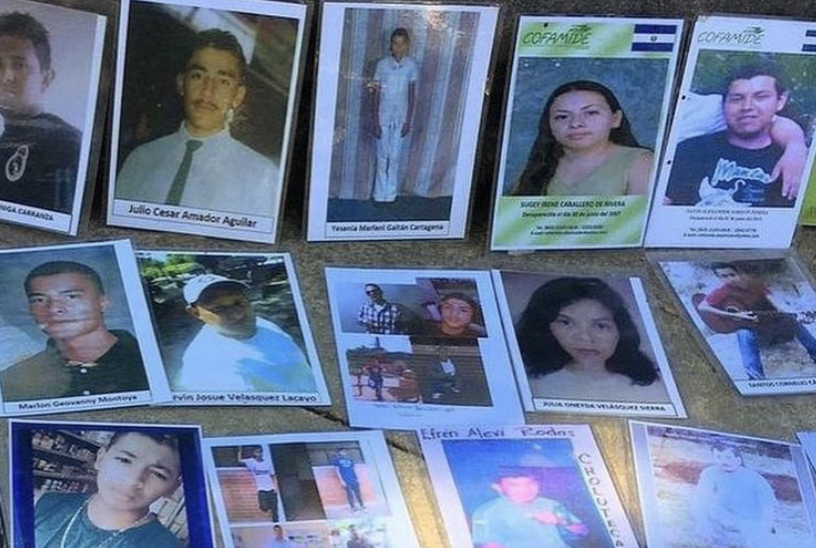 According to Border Patrol, 7,209 migrants have died while crossing the U.S.-Mexico over the last 20 years. However, according to Border Angels, the real death toll could be anywhere between 25% to 300% higher, based on reports of human remains uncovered by other groups such as local law enforcement, humanitarian groups, ranchers, ect. This would mean that, over the past 20 years, there have been anywhere between 9,100 to just under 29,000 deaths. This does not even take into account that, in the harsh conditions of the desert, human remains can rapidly decompose without ever being recorded.

Since 2014, according to the IOM, another 3,400 migrants have gone missing while attempting the U.S.-Mexico border crossing; again, this is likely a vast underestimate of the true number. Collecting data on disappeared migrants is extremely difficult given that there is no singular entity tracking these numbers; the Missing Migrants Project pieced together reports from Mexican immigration authorities and US border county medical examiners, coroners, and sheriffs offices.

What is it that makes this journey so deadly? Migrants who cross the border through the desert risk fatal heat exposure, hypothermia (exposure to cold), hyperthermia (exposure to heat), and drowning. Those who become unable to keep up with the group are often abandoned by the very coyotes they hired—meaning that even a minor injury could result in death. Vehicle accidents—mostly tied to freight trains used as transit—are the first most common recorded cause of death, with violence being the second. Throughout Mexico and Central America, migrants risk becoming victims of robbery, kidnapping, rape, or human trafficking carried out by gangs and cartels.

Migratory routes were not always this dangerous. In 1994, under the Clinton Administration, Border Patrol launched Operation Gatekeeper, designed to keep out migrants by building up the border apparatus—such as increasing detention bed space and building new walls and infrastructure where they previously had not existed—thus intentionally pushing migrants to take more dangerous and irregular routes for crossing. This policy of “prevention through deterrence” led to the militarization of the border as we see it today.

But as the past twenty years have demonstrated, deterrence does not work. Instead, it merely leads to pointless tragedy, as evidenced by the mothers.

For 16 years, hundreds of mothers and family members of disappeared migrants have joined together to form caravans through Mexico in order to search for their missing loved ones and demand justice. They succeeded in locating over 350 migrants and reuniting some, such as victims of human trafficking, with their families.

Most of the mothers in D.C. had already participated in caravans, though this marked their first time traveling to the US. Migrant Roots Media, Pax Christi USA and Proyecto Puentes de Esperanza co-sponsored and organized their journey in coordination with the Movimiento Migrante Mesoamericano.

Karen Morales, the youngest member, had come from Honduras. She had been searching for her brother Aarón Eleazar Carrasco Turcios for nine years. Her mother participated in a 2019 caravan to Mexico, but unable to find any answers, organized her own committee for mothers of disappeared migrants. Tears crept into Karen’s voice as she spoke, displaying a photograph of her brother that hung around her neck.

“Why do our brothers, our family members, flee from Africa, from Haiti, from Central America? Why? The answer is easy. Because there is a lot of poverty and crime. The government makes us believe that they’re coming for a dream, but that’s not true...[gangs] are killing our youth.

“We also came here to be heard, so that the U.S. government can stop sending money to our governments; that only worsens the situation because they are reinforcing the borders, and we believe the money should go to something better, such as education, so that we will never be forced to migrate.”

Congresswoman Ilhan Omar (MN-5) was slated to appear, but could not attend due to a sudden conflict. As the mothers shared their stories, Congressman Raύl Grijalva (AZ-3) listened attentively. When they were done, he stepped forward to give his speech, once in Spanish, and once in English:

“The essential action that is needed on the part of Congress is to do something to assist these countries in a humanitarian manner, no longer in terms of military or security. Resources have to go to the most important interest, which is the people of these countries. And the people need education, food, nutrition, housing and opportunity in terms of employment.”

The caravan had two specific requests for Congress: to enact both the Honduras Human Rights and Anti-Corruption Act (HR 2716) and the Berta Cáceres Act (HR 1574), which both call for the suspension of U.S. assistance to Honduran security forces.

After the media was done taking pictures, I found myself standing next to Karen. When I thanked her for sharing her story, she smiled warmly.

“That’s what we’re here for,” she said. “To share their stories. And maybe, if someone somewhere hears it, they might know something that can help us find them.” 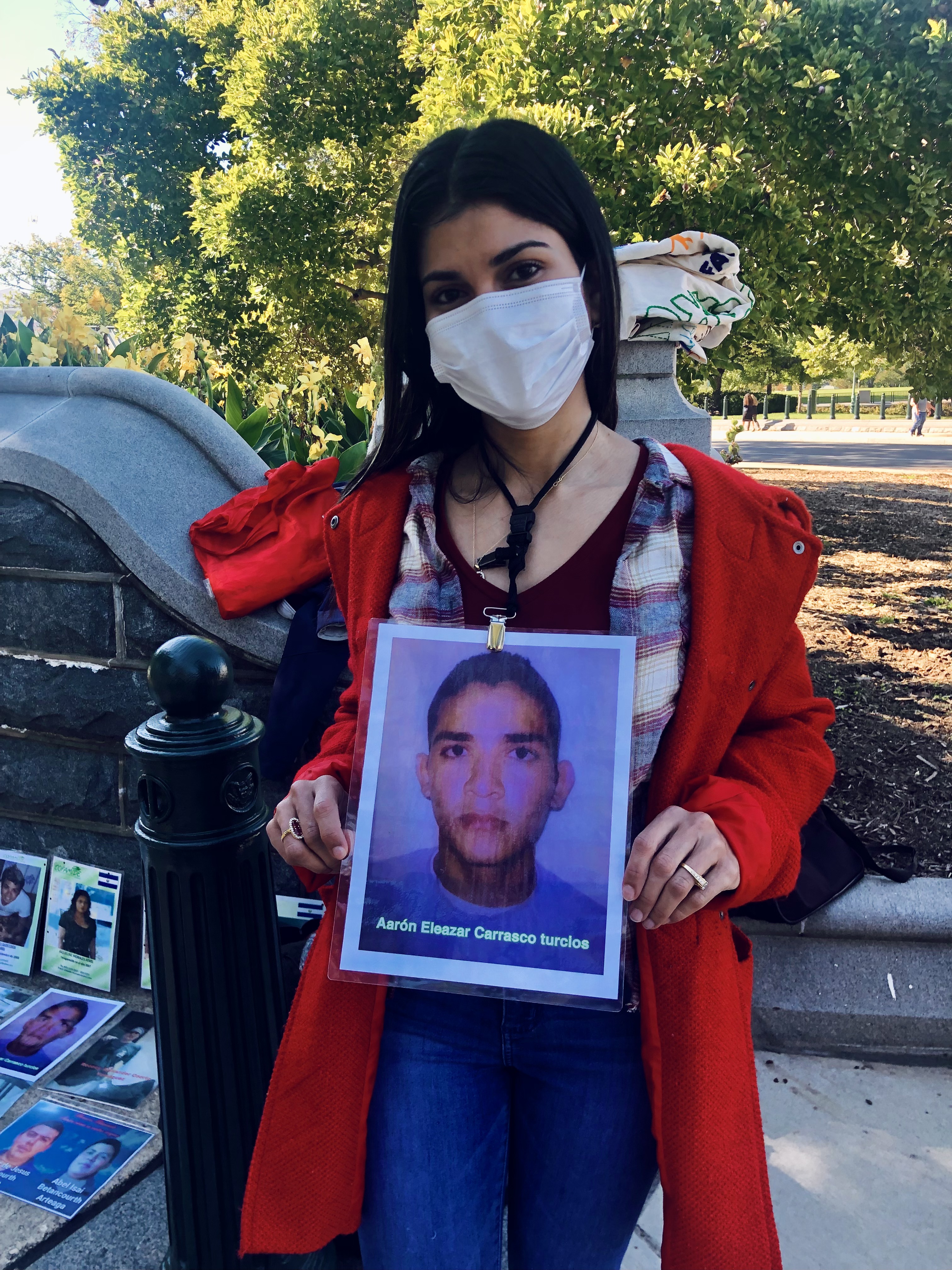 Karen poses for a picture with the photograph of her brother Aarón, who has been missing since 2012.[/caption]

Click HERE to watch a recording of the event.