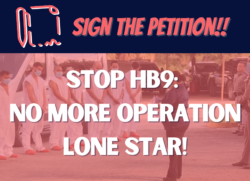 Hanlon’s Razor is an informal principle of logic which states, “never attribute to malice that which is adequately explained by stupidity." Living in Texas for the last ten years, I have decided that one must turn Hanlon’s razor on its head to explain Texas politics. Much of the country tends to attribute Texas political grandstanding to stupidity, when in fact, what is happening is actual malice directed at people for political gain.

Take Greg Abbott, the governor of Texas. He is on a mission. That mission is to make himself into the Lone Star Trump, possibly with an eye toward becoming a player on the national stage, while, minimally, winning over the increasingly extreme GOP primary voters of Texas.

Toward that end, he has committed to continuing to build “Trump’s” border wall on the Texas’ state dime. To pay for the wall, Abbott pulled $250 million from the state’s prison system, which is already underfunded and understaffed, or more to the point, overpopulated with people who should be at home. With much fanfare, including a press conference at the border with Donald Trump, Abbott has pushed this agenda, knowing full well that he can only build, at best, 10 miles of wall with the misappropriated funds (Texas’ border with Mexico is over 1,200 miles long). And then, only if he can find 10 consecutive miles of land that Texas landowners are willing to cede to the state (Abbott has also committed not to use eminent domain). Good luck with that.

Sounds stupid, right? Sure. But the goal is not to actually build a wall. The goal is to give the appearance of standing up to the big bad federal government and its “open border” president. And if Abbott can appeal to Trump’s base (vital to winning the GOP primary) in the process, all the better.

Which brings us to Operation Lone Star.

Operation Lone Star is the latest iteration of Texas governors sending state police into border communities to hassle migrants, and inevitably, also hassle life-long Texans. Abbott’s latest twist on this twisted approach to race-baiting is to arrest migrants under state criminal trespass laws, and send them to prison for as long as possible before turning them over to Immigration and Customs Enforcement, or the Border Patrol for removal. Grassroots Leadership shared video of migrants being processed in a parking lot before being sent to jail, most apparently having no idea what was going on. There are no lawyers and no due process.

Abbott has converted a state prison outside of Dilley for the purpose of holding migrants, at enormous cost to Texas taxpayers. And he is now pressuring a special session of the Texas legislature to make Operation Lone Star, heretofore the result of an executive order issued under a state of emergency, the law of the land (alongside a $1.7 billion appropriation).

Abbott justifies all of this with the claim that Biden’s “open border” immigration policy has been a bonanza for traffickers and drug dealers, which in turn threatens the lives of Texans. Please note: the targets of enforcement are people whose “crimes” have nothing to do with drugs or slavery, but rather that they walked across someone’s front yard. 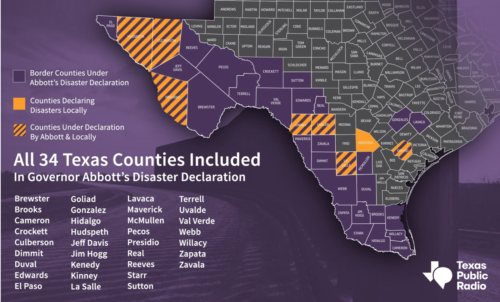 This seems really stupid. But again, to assume any of this has to do with law and order misses the point. Trump’s base, which Abbott desperately wants to also be his base, mostly doesn’t live near the border. They have no idea that border communities have some of the lowest crime rates in the state. Indeed, the murder rate in Hidalgo county is lower than than murder rate in Palm Beach County, Florida where Mar-a-lago is located. They do not know that 11 of the 34 counties included in Abbott’s original disaster declaration declined to participate, including four of the most populous counties in the Rio Grande Valley, nor do they know that very few border counties have adopted their own disaster declarations at Abbott's invitation. Trump’s base is also unaware that state troopers have been hassling border residents in Texas for years already, with no demonstrable impact on migration, and the only impact on crime being an increase in non-border communities that no longer have adequate policing (because their officers have been sent to the border). They don’t know. They don’t care. They just hate Biden.

It is also very clear that they know little about what Biden has (and more to the point has not) done as president. Biden has made some reform moves on immigration (some key ones, like ending the Migrant Protection Protocol or instating a temporary moratorium on deportations have been blocked by a federal judge in Texas in suits brought by Texas’ attorney general). Yet the core elements of Trump’s border policy remain in place, including the framework of “Title 42,” which uses public health authority to expel anyone encountered by Border Patrol immediately, with no chance to seek asylum. Indeed, Biden has actually expelled far more people in six-months than Trump did the previous year.

Another area of non-concern for Texas policy makers is that the reason immigration has recently increased has absolutely nothing to do with border policy in the US (which, as noted, has hardly changed). In fact, migration is on the rise everywhere as the result of a global COVID-19 recession, which has slammed Central America and Caribbean in particular. This has been compounded by the destruction wrought by several hurricanes, and ongoing political violence in Honduras and Guatemala, not to mention draconian US sanctions on Venezuela and Cuba. And this is just the short list of crises that are driving people from their homes.

So arresting people for trespassing in Texas is not going to put any kind of dent in migration. Even by the distorted logic of “deterrence,” the idea that Operation Lone Star will impact migration is laughable. Abbott knows this (no one is that stupid, right?).

No, Abbott is being mean to immigrants because such maliciousness makes for good politics in Texas. Simply dismissing Abbott as a buffoon is thus a huge mistake. Trump won the White House this way, and if not Abbott, someone like him will try again in 2024 with the same playbook. In Texas, we are still living with the result. Trust me, one should never dismiss as stupid that which is done with malicious intent. Never. That’s how they win.

Grassroots Leadership and RAICES, among others in Texas are working to halt HB9, which would make Operation Lone Star law. If you live in Texas you can sign the petition opposing the law here. If you don't live here but have friends that do - share it with them.