Inspirational and Influential Women of the World: Myriam Merlet

Myriam Merlet was considered one of Haiti’s most prominent leaders and catalysts of the women’s rights movement. Merlet was one of the 300,000 people who perished in the  7.3 magnitude earthquake that struck Haiti in 2010. As part of our series on inspirational and influential women, we take a look at her work as an advocate for gender equality and the rights of women facing sexual violence. 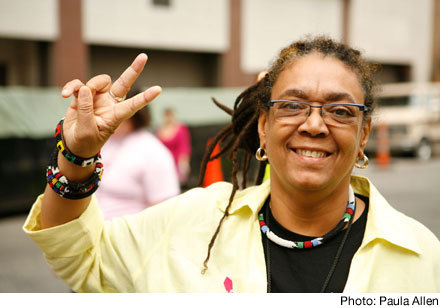 In the 70s, Merlet left Haiti and sought refuge in Canada, where she studied economics, women’s issues, feminist theory, and political sociology. Upon the completion of her studies, Merlet returned to Haiti in the mid 1980s, stating, “While I was abroad I felt the need to find out who I was and where my soul was. I chose to be a Haitian woman. We’re a country in which three-fourths of the people can’t read and don’t eat properly. I’m an integral part of the situation…as a Haitian woman, I must make an effort so that all together we can extricate ourselves from them [the problems].” Upon returning to Haiti, Merlet used her education to lead grassroots advocacy to promote the rights of Haitian women and worked with others to change the culturally accepted norm of gender-based violence.

Merlet was involved in an array of organizations seeking to create and enforce gender equality. In Merlet’s early advocacy years, she founded EnfoFanm, an organization that sought to raise global awareness about the challenges Haitian women face, namely the history and continued use of sexual assault by government soldiers, police, and criminal gangs as means of controlling and oppressing women. EnfoFanm also led a campaign to name streets in Port-au-Prince after famous Haitian women to celebrate and commemorate their work as well as elevate the status of women within Haitian culture. Later in 2006, Merlet took part in creating the Coordination Nationale pour le Plaidoyer des Femmes [National Coordination for Women's Advocacy] and served as a spokesperson for the organization to fight against sexism within the public sector.

One of Merlet’s greatest accomplishments was leading the efforts to reclassify rape. Prior to 2005, rape was considered a “crime of passion” or an “offense against morals” in Haiti. Rape victims and their families seldom received monetary compensation from the perpetrators, and had no hope for a legal sentencing or justice for the victim. In large part thanks to the work of Merlet and many other women activists, rape has been reclassified as a criminal offense. However, there remains a lack of a precise definition of rape as well as strong judicial system to uphold and enforce the criminalization of rape. As a result, many rapes continue to be overlooked by authorities and there is a stark lack of rape prosecutions, leaving victims vulnerable and susceptible to further gender-based violence.

From 2006 to 2008 Merlet acted as the Chief of Staff to Haiti’s Ministry for Gender and the Rights of Women. There, she continued to promote equal rights and end gender discrimination and violence. Though in a government position, Merlet continued to participate in grassroots advocacy and worked closely with the Minister for the Coordination of Women and Women’s Rights, Marie-Laurence Jocelyn Lassegue. Together, Merlet and Lassegue opened the first Haiti Sorority Safe House and V-Day Safe House, both of which act as safe houses for women who are victims of domestic violence. At both of these safe houses women can access medical, legal, and psychological aid as well as gain life skills through the business and computer training courses offered. There continues to be an overwhelming lack of safe houses and aid offered to victims of domestic and gender-based violence. Merlet and Lassegue’s work is carried on by organizations like Fanm Deside, but more needs to be done.

The earthquake served as a reminder of how crucial the work in which Merlet was involved continues to be. A report by Amnesty International stated, “the displacements and living conditions in the displaced persons camps have increased the risk of facing gender-based violence for women and girls, while the destruction of police stations and court houses during the 2010 earthquake further weakened that state’s ability to provided adequate protection.” Women and girls living in the camps with poor lighting at night, unsecure tents, and limited police presence continue to be increasingly susceptible to rape and gender-based violence. Furthermore, the child sex ring run by United Nations Peacekeepers exacerbated the sexual abuse women and girls faced in the camps in Port-au-Prince.

The work Merlet started for the promotion, empowerment, and protection of Haitian women’s rights at the grassroots level remains imperative. The UN’s debacle illustrates why women and local leaders must be involved in the disaster relief process and the need to bring female issues to the forefront of government policy in the hopes of strengthening the justice system to deter rape and gender-based violence as well as provided justice for female victims.

Up Next: Inspirational and Influential Women of the World: Sister Pauline Quinn coming April 20th