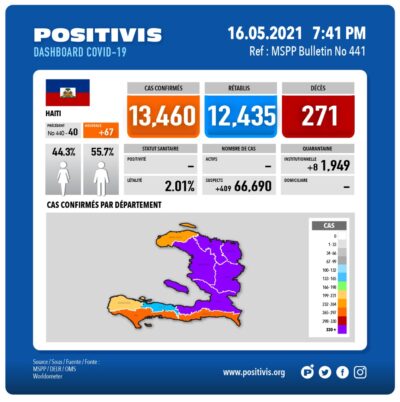 Reports are beginning to emerge of a new wave of COVID-19 infections in Haiti, as hospitals scramble to find scarce supplies. Haiti, like many other impoverished countries, has no clear vaccination program in place. The government suffers from a lack of legitimacy on many fronts, and it is unlikely it could mobilize people on a wide scale to get vaccinated. There is a high level of distrust about COVID in Haiti already, and Moise will certainly have a hard time countering that for the purposes of a vaccination campaign.

That said, at this point there are no vaccines to give anyway. The multilateral source for donated vaccines (COVAX) is severely under served in general. There were 750,000+ AstraZeneca vaccines available to Haiti several weeks ago, but the government turned them down due to concerns about side effects (AstraZeneca has not been approved in the United States). Given the recent bump in cases some health officials in Haiti, such as Dr. Jean William Pape, director of the GHESKIO Center, argue that the government should rethink its position.**[Update below]

Haiti is generally viewed as having escaped the worst of the pandemic - thus far. However, the true toll that COVID-19 has taken on the country is clearly unknown. Official numbers are well below the Dominican Republic, for example, but there is also no comparison regarding testing, which has been almost non-existent outside of Port au Prince. So, while things clearly could have been much worse in Haiti, given the fragility of its health infrastructure, there have probably been many times more deaths from COVID than are recognized. This is of course true everywhere (including the United States).

The third wave is evident in the trend lines for cases and deaths. Though not yet as severe are earlier peaks, hospitals in Port au Prince are seeing an increase in cases and shortages of supplies. Father Rick Frechette CP of St. Luke's wrote over the weekend,

We were never closed since June 2020, but we never needed more than 10 beds.

Now the dramatic upswing with 65 beds, and we expect that 120 beds will again soon be necessary.

The Haitian Ministry of Health has announced variants from Amazon region of Brazil, and from the United Kingdom.

The United Kingdom itself is, according to the NY Times, taking measures against the variant in India that is causing enormous suffering and death.

I spent the morning at Cite Soleil, with Raphael, Fr David (from France), Fr Jean Baptiste (from Haiti) trying to evacuate the wounded from todays gang wars, waged for control of votes for upcoming elections, in this vast and populous area.These are not isolated events. A few days ago, such a gang war took place where the oxygen used for COVID patients is produced. This was a nightmare- we need 240 tanks per day at our current bed level. 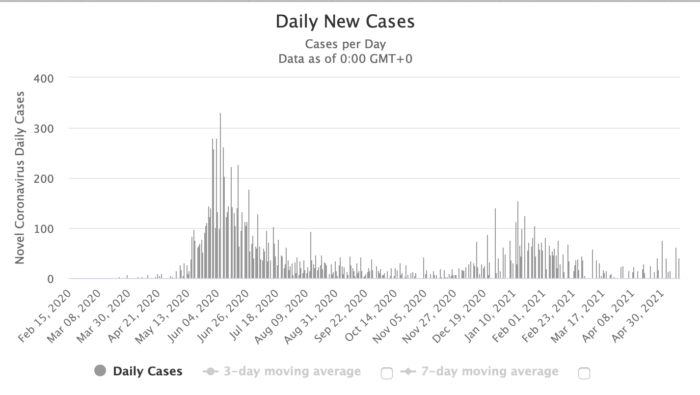 The Economist published research indicating that the true death count from COVID-19 globally is likely 10 million thus far, and that two-thirds of those deaths have occurred in poor countries where undercounts have also been the largest. Giving some sense of what is at stake, they write,

[I]n the short run vaccines will fuel the divide between rich and poor. Soon, the only people to die from covid-19 in rich countries will be exceptionally frail or exceptionally unlucky, as well as those who have spurned the chance to be vaccinated. In poorer countries, by contrast, most people will have no choice. They will remain unprotected for many months or years.

The world cannot rest while people perish for want of a jab costing as little as $4 for a two-dose course. It is hard to think of a better use of resources than vaccination. Economists’ central estimate for the direct value of a course is $2,900—if you include factors like long covid and the effect of impaired education, the total is much bigger. The benefit from an extra 1bn doses supplied by July would be worth hundreds of billions of dollars. Less circulating virus means less mutation, and so a lower chance of a new variant that reinfects the vaccinated.

Though the Economist is editorially suspicious that a much debated WTO waiver on patents and other intellectual property rights for COVID vaccines and technology will offer much of a solution - at least the short term. For one thing, no agreement on a waiver is likely to happen prior to December, if it happens at all. That would be 15 months after South Africa and India first proposed it in October of 2020. But that does not mean wealthy countries cannot help. They suggest,

[i]f Mr Biden really wants to make a difference, he can donate vaccine right now through covax. Rich countries over-ordered because they did not know which vaccines would work. Britain has ordered more than nine doses for each adult, Canada more than 13. These will be urgently needed elsewhere. It is wrong to put teenagers, who have a minuscule risk of dying from covid-19, before the elderly and health-care workers in poor countries. The rich world should not stockpile boosters to cover the population many times over on the off-chance that they may be needed. In the next six months, this could yield billions of doses of vaccine.

Thus far, the United States and Europe have offered money - Biden has pledged the U.S. to $4billion to support COVAX (though the first half of the funds will not be delivered until next year), but they have not donated much needed vaccines. The United States has agreed to loan Mexico 2.5 million vaccines from the U.S. stockpile of AstraZeneca, but in doing so it also leveraged concessions from Mexico for stricter immigration enforcement along its southern border with Guatemala. (Mexico closed its border with Guatemala shortly after the vaccine discussions in March). The fact that the U.S. has stockpiled 10 million doses of a vaccine it is not using is disturbing in and of itself.

Meanwhile, back in Haiti

As the case of Haiti indicates, in addition to donations of vaccines, there is also a need to support the infrastructure needed for the delivery of vaccines (refrigeration at extreme low temperatures, for example, is required for storage and transport of some vaccine), as well as public education.

For now, the ministry of health in Haiti is once again encouraging everyone to wear masks, wash hands regularly, do regular temperature checks, and engage in social distancing as much as possible.  It has also requested the media assist in getting the word out about the importance of these precautions. Hopefully, the government can make a decision soon on AstraZeneca. However, Haiti, a country of 11 million people, needs much more than 750,000 doses.

Long term it is in everyone’s interest for the people of Haiti and other countries to get vaccinated. We are not separately raising funds at this point ourselves, but if you wish to help with supplies, you can visit St. Luke's here. They have been supportive of the community in Gros Morne in times past with medical supplies themselves.

**UPDATE: The Government Approved use of AstraZeneca just after publication (May 19):

Dr. Jarbas Barbosa, assistant director of World Health Organization’s Americas branch, told journalists Wednesday that the president of Haiti informed them that the country will accept the AstraZeneca vaccine. The government had previously expressed concerns about the shot’s safety following reports of clotting and had banned it from being used, despite being offered free doses.