Haitians, others in caravan attacked in Mexico 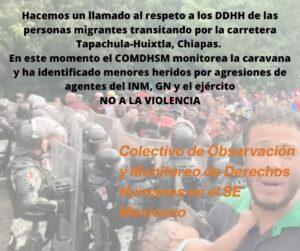 On Saturday a caravan of migrants formed in Tapachula in the state of Chiapas, Mexico. The group was mostly composed of Haitians, but included others from Venezuela, Central America, and Guinea. The caravan tried to leave Tapachula in protest of the refusal of the Mexican government to grant asylum - or even render a judgement - after a year or more of waiting. The situation in Tapachula has been aggravated by the United States government launching a new round of deportation flights to Tapachula and Villahermosa (in neighboring Tabasco). Those flown in are being bussed to the border with Guatemala and left. In the context of this new round of expulsions, Haitians with legal documentation to stay in Mexico - most having applied for refugee status - have also been removed to Guatemala.

On Friday we shared a joint statement from groups in Mexico protesting both the US and Mexican governments for their treatment of people seeking a better life.

The caravan in Tapachula was not trying to reach the United States. Rather, people were trying to move to another location within Mexico where they could find work.

“The important thing we need is to leave Chiapas, because there is no work in Chiapas. In Chiapas there is no way to live, people are treating us like animals. If we are refugees, what we are looking for is a way of living to be able to eat,” explained one of the migrants, before starting the caravan.

During the week that passed, the migrants held protests outside the offices of the National Institute of Migration (INM) and COMAR, to ask for the speeding up of their refugee procedures.

As noted most had documentation that would allow them to move within Mexico. Nevertheless, the caravan was brutally attacked on the road between Tapachula and Huixtla on Saturday.

According to the Colectivo de Observación y Monitoreo de Derechos Humanos en el Sureste Mexicano (COMDHSM) those who made it to Huixtla were now appealing to the government of Mexico to provide transport and safe passage for them to Mexico City. The Colectivo further demanded that the government: 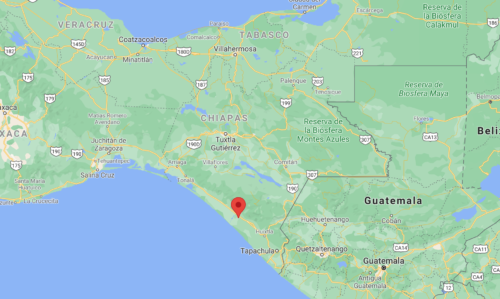 This afternoon the caravan is approaching Mapastepec, along the coast in Chiapas (see pin in map to the right). COMDHSM continues to call for the government to respect the rights of the people in the caravan and those journalists who are accompanying them.

[COMDHSM  reported earlier that another caravan was planning to leave Tapachula this morning, but I have not seen coverage of that yet today.]