“The racism against people and families from Haiti – for those who have been victims of violence, trauma and family separation – is institutional.”

On Saturday, September 11, Mexican immigration authorities working alongside the National Guard launched an operation that led to the arrest and detention of 400 migrants from Central America and Caribbean. Later in the morning, 150 of them, all Haitians, were expelled from Mexico into Guatemala. According to newsource, Arestegui, they were driven to the border crossing at Carmen in the department of San Marcos, Guatemala. “There, they abandoned the more than 150 Haitian migrants, including children, women and men, to block their re-entry to Chiapas.”

On Monday, September 13, hundreds of Haitians, alongside migrants from Cuba and countries of Africa, gathered in the central square in Tapachula demanding permission to leave the state. This follows several caravans of Haitians and others who have tried to leave Tapachula over the past two weeks, only to be turned back, often violently, by INM and the Guardia. 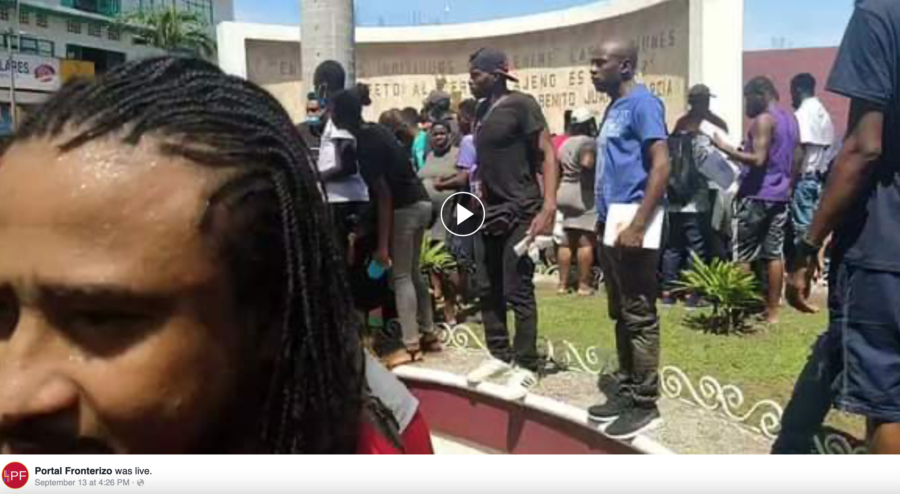 The majority of migrants entering into southern Mexico continue to be from Central America, but there has also been an increase in the number of migrants from Haiti, many of whom have applied for asylum or refugee status. Nearly all of whom have been trapped in or near Tapachula, Tabasco while waiting - some for close to two years.  According to Mexican Senator Emilio Álvarez, as of September 7 of the 137,000 migrants present in southern Mexico, 30,000 were Haitian nationals. Other sources show that as of the end of August, of the 55,000 people who have applied for asylum in the Tapachula office of COMAR this year, 19,000 are Haitians.

Haitians arriving in Mexico over the last two years are mostly coming from Brazil and Chile, where economic pressure and nativist/racist backlashes have led to more restrictive immigration laws and declining work opportunities. The ongoing political crisis in Haiti is also leading people to look for a way out, many traveling to South America through the Dominican Republic and then up through Central America. Whether people’s journeys from Haiti started 10 years ago or 10 months ago, the trip is long, extremely dangerous and expensive. In Mexico, people are stuck near the Guatemala border awaiting legal status that will provide mobility within Mexico.

The crisis along Mexico’s southern border is the direct result of pressure from the United States government, which has demanded that Mexico block the passage of Central American migrants and others. Such pressure is not new. Clinton, Bush and Obama pressed the government of Mexico on migration. Trump, however, took it to extremes, blackmailing the government of Mexico under threat of trade sanctions to halt migration. Biden has not relented in this pressure. Though more reliant on carrots (promises of vaccine support) rather than sticks (sanctions), Biden has nevertheless pressed Mexico repeatedly to block the movement of people migrating toward the US-Mexico border.

As a result, since 2019 Mexico has further militarized its southern border and placed restrictions on the movement of migrants. Under pressure from Biden back in April of this year, the Mexican government agreed to send up to 10,000 more National Guardsmen to the southern border to assist with immigration enforcement.

In 2019, Mexico also changed rules covering temporary, oficios de salida or “exit visas.” Prior to the summer of 2019, people arriving in southern Mexico could receive a visa for 15 to 30 days - allowing them time to apply for a change in status. Many traveled to the border with the United States. Visas now require exit through the nearest (for most) southern border, leaving people with the option of applying for asylum, or other change of status within that time frame. If trying to reach the United States immediately, they must do cross Mexico in an unauthorized manner.

For Haitians, Cubans, and others from Africa and Asia, simply returning back to Central America is not really an option; indeed, this was not even possible for most 2020 because of COVID-19 travel restrictions.

In October of 2020 there were caravans protesting these new visa rules and other restrictions on mobility for asylum seekers; rules that require people to stay within the border of the state within which they sought asylum - for the vast majority of Haitians this is Chiapas. The resulting caravans were violently repressed by the National Guard in a preview of what we are seeing now.

Meanwhile, COMAR is overwhelmed. Legally required to issue asylum decisions within 45 days, COMAR is now taking months, and in some cases, years to make a determination.

The result is a simmering crisis fueled by human rights violations and an asylum system backlogged to the breaking point.

Much of the above may seem episodic in the sense that the backlog and new rules have resulted from a very particular convergence of issues, all exacerbated by COVID-19 travel restrictions. However, for Haitians and other black migrants, there remains a long standing tradition of discriminatory treatment at the hands of Mexico’s immigration authorities.

In September of 2019, the United Nations’ Committee on the Elimination of Racial Discrimination (CERD) raised specific concerns regarding the Mexican government’s treatment of migrants as part of its review of the government’s fulfillment of obligations under the Convention for the Elimination of All Forms of Racial Discrimination. Concerns included the “negative impact of the work of the National Guard on migration control and the use of racial profiling by migration authorities, which has led to arbitrary detention and systematic refoulement without adequate legal advice.” Finally, the CERD noted, “concern that the phenomenon of migrant caravans has led to an increase in discourse informed by discriminatory views, racial hatred and xenophobia targeting migrants.”

As a result of these findings, the CERD made several recommendations for reform, including a review of the deployment of the National Guard with a view toward “withdrawing it from that task,” and also called for thorough investigations of “all acts of discrimination, excessive use of force and abuse of authority committed against migrants.”

In June of this year a coalition of organizations in Mexico issued a statement against the government for its failure to implement these recommendations. They wrote,

The racism against people and families from Haiti – for those who have been victims of violence, trauma and family separation – is institutional. One of these cases is Maxene André who died on the 6th of August 2019 inside the Migration Centre “Siglo XXI” in Tapachula, Chiapas. André was sick and isolated for 15 days out of the 20 days that he was in detention.

The attacks against the migrant caravan earlier this month is thus a reminder of the Mexican government’s ongoing failure to implement necessary reforms to address violations against migrants, including the failure to take steps to respond to the specific needs of migrants from Asia, Africa, and the Caribbean.

Within Mexico, human rights organizations are speaking out about the situation, and demanding that the government make reform immediately. The calls for reforms include providing migrants work authorizations that would allow them to travel beyond the boundaries of Chiapas while they await a decision on their asylum claims. The United States is also called out for its relentless pressure on Mexico to halt the movement of people approaching the US border.

For those of us in the United States, this last message is crucial. What is being discussed as a border crisis, at both the northern and southern borders of Mexico, cannot be separated from the United States government's relentless campaign against asylum. Trump launched an all out war against asylum - at a time when border crossing was actually at a low point. Now, with institutions degraded and processes uncertain, Biden seems to simply be doubling down, blocking avenues to asylum in the hopes that doing so will deter enough people from trying to come here that he can buy some time to implement reform.

It is demonstrably not working.