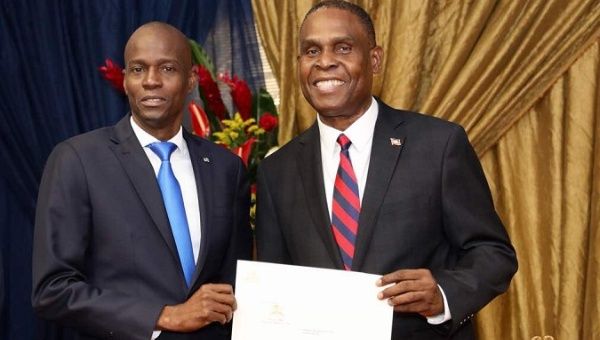 On July 14, 2018 Haiti’s prime minister, Jack Guy Lafontant, resigned following widespread demonstrations sparked by fuel prices increases. Lafontant was blamed for the poor execution of the plan's roll-out - particularly by the business community, which criticized Lafontant for lack of preparation regarding security. Seven people died in the demonstrations. The fuel price increases were suspended - but the pressure behind those increases remain. The International Monetary Fund had required a steep reduction of Haiti’s fuel subsidy program - which led to the price increases. The IMF is still hovering.

Lafontant may well have been the fall guy - as the thousands of people in the street were actually calling for president Jovenel Moise to resign. Lafontant’s resignation seems to have bought Moise some time.

The search for a replacement - for what is going to be a very difficult job - has led to the nomination of Jean Henry Céant. Céant ran for president twice (2010 and 2016) as the head of the Renmen Ayiti (Love Haiti) Party. As of now, Céant has deposited his papers with parliamentary leadership and is awaiting a confirmation vote.

Jean Henry Céant has a controversial background.  In a profile by Kim Ives, Henriot Dorcent, a Haitian political analyst who speaks on the weekly Truth Serum/Haiti on the Airwaves, summarized Céant’s career as follows.

Céant is a consummate opportunist...Under the dictatorship of Gen. Prosper Avril, he worked closely with lawyer Réné Julien, who was Céant’s mentor and Avril’s cousin. But when the political winds shifted, he joined Aristide and the Lavalas, acting as Aristide’s notaire and getting jobs for his wife as Aristide’s private secretary and his brother in CONATEL. Then he jumped into the Martelly camp, where he headed the project to remove people from their homes in downtown Port-au-Prince after the earthquake without compensating them. When Jovenel came to power, there was a scathing report by Haiti’s anti-corruption unit UCREF detailing Jovenel’s money-laundering through his business Agritrans. Who was the first to jump to Jovenel’s defense, saying the excellent report was a fabrication? Jean-Henry Céant!

Because of Céant’s particularly unsavory role in removing people from housing following the earthquake in 2010, his nomination is not a popular choice. Indeed, in the same profile by Kim Ives, Fanmi Lavalas activist Farah Juste explains why Céant’s nomination may be doomed:

First, the people despise him for the way he made money off of uprooting them from their homes in downtown Port-au-Prince under Martelly and [his Prime Minister Laurent] Lamothe. Second, the opposition doesn’t like him and doesn’t trust him. Thirdly, Jovenel would never let him run things, the same way Jovenel completely controlled Lafontant.

Juste speculates that Céant is cannon fodder, and that Moise’s real choice will come next. We’ll have to wait and see. Whoever becomes prime minister, the country will remain squeezed by the International Monetary Fund and U.S. policy makers from outside, and by the business-controlled neo-duvaliast alliance represented by Moise inside the country. One suspects the policy output will be the same no matter who gets the nod, it’s just a matter of finding someone who can sell the program. On that count Céant seems an unlikely candidate.

[…] cabinet. Since the resignation, Haiti has been without a functioning government. President Moïse nominated Jean Henry Céant to the post of Prime Minister on August 7, but his confirmation in Parliament has […]