As part of our celebration of the 20th anniversary of the launch of the reforestation project in Gros Morne, Haiti in partnership with the Jean Marie Vincent Formation Center, we are sharing reflections from people who have been a part of the program over the years. This week we are sharing a reflection from Roy Lanham, campus minister & advisor for the Haiti Connection at Eastern Illinois University. 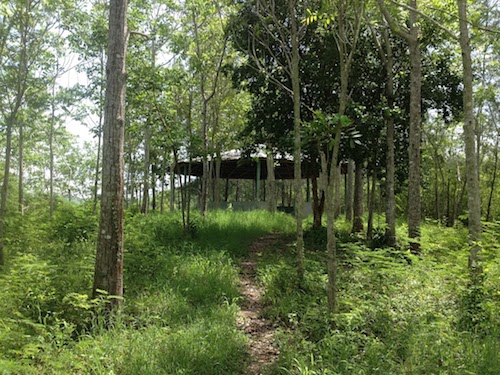 Gazebo at the peak of Tet Mon[/caption]

As part of our mission experience in Haiti, Amy Jobin invited us to come to Gwo Mòn to experience the beauty of the place and its people. At the time we were open to exploring other options and missions. And so we came. As part of our exposure to the area, Amy and Sè Pat took us to what would become the Jean Marie Vincent [JMV] forest. It was just like every other hill top  in the area: I do not remember a single tree. (I was also thinking, Amy this is not as beautiful as Barassa.) Amy and Se Pat shared with us the vision of what was going to happen there. There were men already at work on the hill: cutting out scrub brush and preparing the land to receive the first set of trees, building the "ditches" with this cool "A" frame tool that allowed the ditches to all fill up at the same time to keep the water from just rushing down the hill.

I was impressed with the desire to "get it right." I was hopeful because it wasn't just a Sè Pat project, but it seemed our Haitian brothers and sisters believed in the value this forest would have. I have to admit it was hard to see success. They took us to Grepin Center and the tree nursery where the trees were being prepared. I remember them not just speaking about the new JMV planting, but their efforts to get farmers to plant trees throughout the zones. In fact, they showed us the room where formations took place and pictures of people picking up their trees. It was a vision of what could be.

As we continued to come over the years we watched the trees grow and the along with it the vision. The first set of trees were planted in rows and it had an "English garden" feel because it all seemed so tidy. I remember on a number of those early trips when Sr. Pat (Amy no longer lived in Gwo Mòn) asked us to cut the vines that encircled seemingly every tree they had planted. We had a big team and she said, as only she can: "Since we are here visiting imagine if every one of you would cut 100 of the vines off of the trees. This would keep 1800 trees from being choked." We did  it. And we did this on more than one occasion over those early years.

We never gave money to this project, but it was always an important part of our experience of Gwo Mòn to visit JMV. I know my memory has faded over time, but I am almost certain Sr. Pat took us to the forest the first 10 years. I remember how energized she was and still is about trees.

I believe like all things, the value of the forest has deepened over the years, but with a twist. At first, I sensed it was like: hey someone wants to plant trees and give some jobs, great. It felt like any other "project" in Haiti. But it did not take but a couple of years and there was this energy. . .groups began to be formed (AJGR, Association of the Youth of Gros Morne, for example) that wanted to imitate JMV and what was happening there. When the sisters moved to their new digs, Sr. Pat transformed that piece of land, I believe because she saw what was happening at JMV and knew it could happen where they lived in town. I remember another tree nursery starting, I remember other smaller efforts, throughout the zone where the Monfortains did ministry: ti forèt yo. Some with success and some not, but all of them efforts born out of JMV.

And so the number one value would be HOPE. They have this beautiful and constant reminder of what is possible. I do not believe we will have "green hats" on every mountain any time soon, but you realize it is possible to show people how to restore the land. How to believe that the last chapter is not written, and it is possible to renew  the land. It is a living laboratory for sure.

The other piece which is not lost on the people of Gwo Mòn, is the forest has become a place of prayer. Isn't it amazing that folks come to pray there. The link between the God of Redemption and the God of Creation is so beautiful and probably best exemplified in the way of the cross/stations on Good Friday.

Finally, the Grepin Center keeps expanding their efforts to create a vision for the people. I think the agronomists, the benefactors, the priests, the people  only have to look up the hill and see what is possible whenever they get overwhelmed by the myriad of problems that beset Haiti. Right here, right now this works.

I have to admit it was not until the second planting that we began to see the real value of the trees. For the first time we began to hear birds and then see them. The Gazebo became a place where we would reflect a bit on what was going on around us (we don't do this anymore) and we would wonder about what if every mountain in Haiti began to have a "green hat?" It had this effect on us, and we were just visiting...The trees of the first planting are twenty years old and there is a sense of look at what it possible. Having said this, it is when you get into the second planting that you feel you are in a forest. I guess that is the effect pines have on you.

This change might seem strange: First there was a real concern to keep the canals cleared, so they could fill properly and aid with keeping the water from causing erosion and to keep some on the mountain. I think it is amazing that twenty years later they are allowed to be filled with leaves and whatever and they are becoming "Just memories," because the trees themselves are doing what the canals did in the beginning. To me, that is one of the coolest changes.

Sr Pat in those early years and her desire to show off the forest, even when it was just a bunch of saplings was amazing. It didn't seem like much was happening, but her enthusiasm was contagious.

The men we would meet on the mountain and listening to them talk about their work had a pride in what they were doing for JMV and for the community. Lives transformed.

The joy we have had over the years in bringing our mission teams to the top. Many times, it is seen as a thing "Roy wants us to do." However, always, always afterwards the students talk about the beauty and the power of the woods. Isn't that cool. They write about it in their journals. It has an impact on them to see what is possible. It is at moments like that I am reminded how we all are connected, and how all our lives are interconnected on this planet of ours.