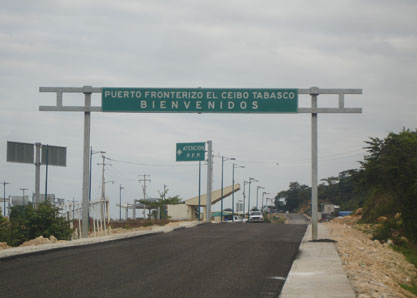 Last week we, and everyone else, reported that Biden decided to maintain restrictions on asylum seekers put in place by the Centers for Disease Control and Protection (CDC) under pressure from Trump's immigration advisor, Steven Miller. The restrictions claim authority under Title 42 of the US Code, for the government to restrict travel on public health grounds. Miller lost no time in pressing the CDC to issue the order last year, using COVID-19 to achieve what he had otherwise failed to do: Close off access to asylum at the southern border.

Under Title 42 people encountered by Border Patrol are simply expelled - as quickly as possible. The vast majority are expelled into Mexico, while some others, including folk from Haiti are detained briefly before being put on flights home. Biden halted the expulsion of unaccompanied children in January, and has reduced the number of families expelled - but has refused to halt family expulsions altogether, a decision that led a host of organizations to restart a suit against Title 42 in federal court. Since the beginning of this fiscal year (October 2020) 750,000 people have been summarily expelled under Title 42, and well over a million people since the program was first launched in March of 2020.

So what are these flights about?

What became apparent quickly is that many people once expelled, tried to cross again. The so-called recidivism rate, or the percentage of people who re-cross after being expelled, increased significantly under Title 42. With this change also came a shift in demographics. The largest group of people expelled are single adults, and most are from Mexico - not Central America which had been the pattern in the years prior to Title 42. To deal with the recidivism issue, the United States re-started interior flights to Mexico, basically flying people to Mexico City or further south to make it harder for them to return to the border.

This week, the twist is that Biden’s Immigration and Customs Enforcement (ICE) is now flying non-Mexican nationals to airports in southern Mexico, where most are then put on busses by Mexico’s migration authority and forcibly expelled into Guatemala.

Hundreds have ended up in El Ceibo. From The Washington Post:

“They are being tricked, because in Mexico they are told that in El Ceibo there will be a bus that will take them to their countries. These are lies. When they arrive they say: Where is the bus? Where do I take it to go to my country?” said Natalia Lorenzo, who works for the Guatemalan government’s human rights ombudsman in Petén, the department where El Ceibo is located.

Andrés Toribio, who runs the shelter in El Ceibo, said he was shocked by the sudden arrival of hundreds of migrants from the United States. The area is mostly known as a crossing point for migrants being smuggled north and a transit point for drugs.

On Monday night alone, Toribio said, at least seven buses arrived with those had been expelled from the United States.

“These are people whose rights were violated,” he said. “They weren’t given the right to apply for asylum in either the United States or Mexico. Then they end up here in a place with almost nothing for them, without organizations that work with migrants.”

To be clear what this means - people who have fled violence in Central America, passed through Mexico and made it to the United States border, are being denied the right to make an asylum claim, detained, then put on a plane to Villahermosa or Tapachula, Mexico and expelled back into Guatemala by bus - all in the name of public health. Mostly these are single adults, but families are being expelled in this manner as well.

Public health experts have been arguing with the CDC, Trump and now Biden about Title 42 since its inception. There is no public health justification for denying people access to asylum. None. It is fully possible, as the United Nations High Commission on Refugees reminded the United States yet again this week, to design a COVID-19 screening process that honors asylum obligations and maintains public health.

Meanwhile these expulsions are themselves a public health disaster. From the beginning of the pandemic immigration detention facilities (along with prisons) have been hotspots for COVID-19 infections. So, it is no surprise that the Delta virus is creating a new and dangerous spike throughout ICE’s detention network. People who are flown out of the United States are first detained. Even if this is just over night or a few hours, they will end up in staging areas where people from throughout the US detention network pass through. Exposure is practically guaranteed. Then there is the crowded flight, followed by being packed on a bus and then dumped at a border. None of this exhibits much concern for public health or COVID-19 prevention.

Much of the media focus has been on the politics of immigration, specifically highlighting the pressure on Biden to not move too quickly, lest the screams of the nativist/Trumpistas drown out the rest of his agenda. Clay Risan at the New York Times, for example, points to polling that shows only 33% of US Americans think Biden is doing a good job on immigration and a slight majority, 51% who think he is not. Of course, some of the naysayers are unhappy because he is not moving fast enough. Indeed, Biden is leaning on Trump’s disastrous policy infrastructure while initiating changes only on the margins. Much has been promised, some good things delivered, but not nearly enough has changed in core policy areas, like Title 42. The dissonance is increasingly hard to take.

For now, Title 42 is in place for at least another 2 months.  Even if the courts step in, the case before them deals with family expulsions under Title 42 - not single adults which make up the vast majority of removals. We don’t have to accept that - and will keep fighting it. But it would take little more than a directive from the White House to end these flights - and that should happen now.

What to do? You can let the White House know you want these flights ended. The White House Comment line is at 202-456-1111. You can also check here for additional ways to communicate with White House officials.

We are raising funds for the shelter in El Ceibo, Guatemala that is receiving people who have been expelled. You can make a donation here to help with that, and share the link with friends. We will have more of an update after staff visit the shelter tomorrow.