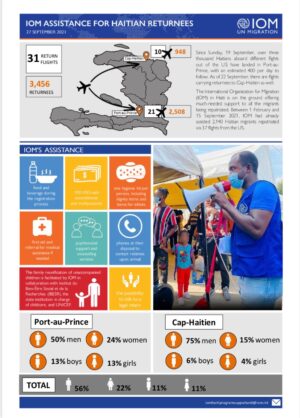 On Friday, September 17, there were 15,000 refugees under a bridge in Texas seeking entry into the United States. Most of them were from Haiti. A week later, they were all gone. What happened to 15,000 migrants in the space of 7 days?

The numbers below are not precise, and, to be clear, people came and went from the camp, so likely more than 15,000 people were there at some point during the week. DHS also reports that there were 30,000 encounters in the Del Rio sector overall (including the camp), starting on September 9 to September 24. So some of the deportation and expulsion numbers reflect that reality as well.

Based on press reports and feedback from folk who have spent the week in Del Rio, this is a rough outline of what has happened to people from the camp, and others arrested by Border Patrol in the area.

Expelled to Mexico: According to Secretary Mayorkas, 8,000 people "voluntarily” returned to Mexico. “Voluntary '' in this case means being told to go back across the river or be deported back to Haiti. Mexico has been reluctant to accept Title 42 expulsions from Haiti until now, yet, received them this time. This is a reminder that Obrador refuses to say “no” to the United States on immigration no matter how abusive the request. Those “voluntarily” expelled back to Mexico were mostly bussed away from the border once there, many to Tapachula, Chiapas. Others were flown from Reynosa to Tapachula or Villahermos in Southern Mexico by Mexican immigration authorities. For those who evaded INM at the border they are now targets for arrest and detention.

Of course, many people had fled from Tapachula over the last few weeks - some after waiting months, or even years, for a decision on their asylum claims within Mexico. Unable to leave the state legally until a having received a decision from COMAR, and with no work available in Tapachula, in desperation people began leaving in large numbers at the beginning of September following a crackdown by INM and national guard on several caravans protesting conditions in Tapachula. The crisis in Tapachula was the precursor to the disaster in Del Rio. By flying and busing people back there now, the situation will simply continue to decline.

Expelled on ICE Air Operation flights: From Sunday, September 19 to Monday, September 26 the United States flew 37 removal flights to Haiti. The flights will continue into this week and possibly beyond. The pace of flights has been so intense that ICE Air Operations began flights to Cap-Haitien in addition to Port-au-Prince, and expanded its roster of sub-contractors. iAero, the company that gets 95% of all ICE Air flights, also got the lion's share of these flights, but World Atlantic Airline and Global Crossing Airlines were also paid for flights this week. Lest we forget, there is a lot of money in official cruelty - one reason we keep doing it.

Immigration and Customs Enforcement, which oversees these flights, never gives out details. We can estimate from 32 flights that close to 3,400 people have been deported through Sunday - with 6 flights on Monday the total will be over 4,00o soon. CNN reported 1,424 on 12 flights as of Wednesday last week based on data from the International Organization on Migration office in Haiti - 40 were children who did not hold a Haitian passport).

If Biden keeps up this pace there will be 6,000 to 7,000 people expelled to Haiti over a two week period. I cannot think of another country to receive this heavy concentration of expulsions in such a short period of time - especially considering that Haitians have made up a very small number of encounters at the border so far this year (less than 2%).

Detained while awaiting expulsion: Many of the people remaining in the United States are in detention facilities. Early in the week, Border Patrol began bussing, and flying people to other ports of entry to be held pending removal. People have been detained all along the border from Eagle Pass to Pearsall to the family holding center at Dilley. Mayorkas’ comments earlier in the week suggested as many as 6,500 people were transferred to other facilities Those not already part of the deportation total above will likely be included unless they receive support from attorneys.

As much as the bridge captured headlines, it is important to understand that Border Patrol has been encountering 6,500-7,000 people a day all summer. Most are expelled under Title 42 immediately, but because of the new strategy of flying, many of those expelled into the interior of Mexico, and many more are detained for days or weeks while awaiting flights.

The conditions in these Border Patrol facilities are routinely horrendous. Overcrowding hasn’t helped. Reports from inside are of people who are sick, with high fevers, and not getting medical care despite attempted advocacy by attorneys.

The horrendous conditions in the camp in Del Rio, the abuse meted out by Border Patrol agents against migrants, and the horrible detention conditions has led to a civil rights complaint against DHS. The Grio summarized:

Haitian Bridge Alliance, The UndocuBlack Network, Black Alliance for Just Immigration (BAJI) and African Communities Together on Friday sent a letter of complaint...addressed to the department’s head of Office for Civil Rights and Civil Liberties, Katherine Culliton-González.

Highlighting the graphic images and video of U.S. Customs and Border Patrol officers on horseback hitting migrants with horse reins used as whips, the complaint accuses the department of several violations and demands that DHS stop the deportation of migrants who were either victimized by CBP or were witnesses of abuses at the border.

Some families allowed to stay: Other folk, mostly families, have been allowed to stay in the United States for now. Some have been given an order to report to immigration authorities within 60 days - others are in detention awaiting processing. Reports from attorneys in Del Rio are that the documents many people have been given are improperly filled out by Border Patrol agents and some contain no dates. This kind of sloppy care at intake is often a problem for people who later seek asylum. It is hard to believe it was unintentional.

It is not clear how many people from Del Rio were permitted entry - thousands to be sure. In San Antonio, Dallas, El Paso and Houston, families were arriving all week to temporary facilities set up mostly by volunteers, who received them and helped them along to the next phase of their journey, wherever that might be.

According to the Washington Post, DHS officials estimated that 30,000 people were encountered overall in the Del Rio sector over the two week period starting September 9, and that of those 12,400 were allowed to request asylum or other form of protection. That said, it seems that for the 15,000 people in the camp, the majority were expelled.

While the Associated Press (and any number of Republicans) raised concerns about these admissions undermining Biden’s “deterrent” strategy, it is worth noting that as of September 30th, Biden will not be able to expel families under Title 42 anyway. This follows a Federal court ruling blocking the practice - unless the administration wins an appeal. People allowed to stay will not be expelled any time soon. However, they still face an uphill battle to remain in the United States, as most will likely not be granted asylum in the long run.

If DHS encountered 30,000 people during a two week period, with about half of those ending up under the bridge in Del Rio, the break down is something like this:

12,000+ allowed to apply for asylum or other relief (almost all families w/children). Many of these people are still in detention.

6,000 in detention waiting to be expelled - though some might be allowed to stay, certainly people are fighting for them.

4,000 already deported to Haiti as of end of the day, Monday, September 27. (I do not know how many people were expelled to other countries during the last two weeks from Del Rio or the camp specifically).

Donate to support legal services: There are a number of groups trying to provide legal support services to those in custody. The folk we work most closely with are with the Haitian Bridge Alliance. They are amazing. You can donate to support their efforts directly here.

Continue to demand that Biden halt these deportations: Call the White House at 202-456-1111, or contact your member of Congress and ask them to speak out against the expulsions. We’ve set up a form to make that easy for you here, or click the take action button below. Following up with a phone call helps, and certainly sharing this update and the alert spreads the word.

Thanks for yhis informative article- and Support