Biden v Trump: When the “lesser of two evils” turns out not to be

Somewhere in this country, Stephen Miller is probably sitting in a grimy basement watching television reports of the debacle unfolding under the Del Rio bridge. Fingers twitching in imitation of the Simpsons’ Mr. Burns, he grins and cackles and gives himself high fives. As Trump’s immigration adviser, Miller handed Biden a time-bomb, and it is now blowing up. I assume Miller is enjoying this. 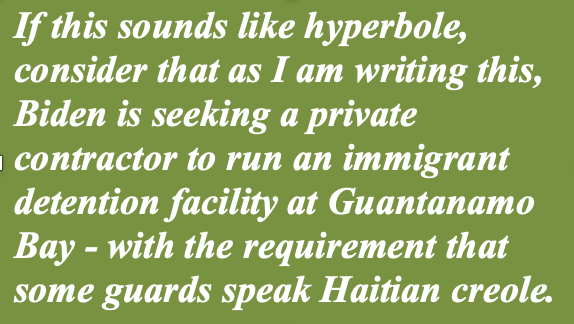 Of course, Biden is hardly the victim here. Elected on an immigration platform that was one half “I’m not Trump” and the other “I’ve got ideas,” he has had ample opportunity to defuse this bomb. Instead, he chose to double down on some of Miller/Trump’s worst ideas regarding access to asylum in the United States, thus, basically jettisoning both of the guide posts of his platform.

Though saying many of the right things, and making some gestures at reform early on, with a few exceptions, Biden’s administration is indistinct from Trump’s as far as the impact on peoples’ lives. If talking about Haitian migrants, Biden is demonstrably worse.

This is primarily because Biden has kept Title 42 enforcement in place and expanded its reach. This policy is the direct cause of the disaster in Del Rio, and the inhumane solution of mass deportations of refugees back to Haiti.

Title 42 refers to an order issued by the Centers for Disease Control and Protection (CDC) that claims authority under Title 42 of the US code to block people from seeking asylum in the United States so that they may be summarily expelled. The order was issued to avoid holding people in aggregate settings, such as detention facilities, where COVID-19 might spread, and also to protect Border Patrol agents. The original order was issued in March 2020 and has been updated several times since, most recently by the Biden Administration in July 2021.

One look at Del Rio and it is clear that the order was never really meant as a public health order. People are placed in “aggregate settings” all of the time. They are detained, forced onto planes and flown all over the world, put into busses and so on.

The CDC initially opposed implementing an order under Title 42, claiming the order lacked a public health justification. But after pressure from Miller, and ultimately Vice President Mike Pence, the CDC was forced to issue the order. As Dr. Anthony So, an international public health expert at Johns Hopkins Bloomberg School of Public Health, wrote in a letter to Dr. Redfield in April 2020, “The decision to halt asylum processes ‘to protect the public health’ is not based on evidence or science...This order directly endangers tens of thousands of lives and threatens to amplify dangerous anti-immigrant sentiment and xenophobia.”

In January 2021, public health experts pleaded with CDC Director Dr. Robert Redfield and Acting Secretary of HHS Norris Cochran to rescind the CDC policies, stating, “[t]he CDC order does not, nor was it ever intended to, protect public health. Exploiting public health to ban refugees and immigrants was a goal of the Trump administration long before the pandemic. The Trump administration furthered this anti-immigrant agenda when it strong-armed the CDC into authorizing the mass expulsion of asylum seekers.” Biden promised a review of the policy, and in July of 2021 he extended it indefinitely - another evaluation is due in October.

With Title 42 remaining the operational framework at the border, not only are people still being expelled by the tens of thousands each month, but the impact of other reforms is made moot.

For example, early in his term, Biden cancelled controversial Asylum Cooperation Agreements that Trump had negotiated with Guatemala, El Salvador, and Honduras. Under these agreements people from Central America who sought asylum in the United States were to be flown to one of these countries. It was a really bad idea, and only implemented briefly with Guatemala (and then shut down due to COVID travel restrictions). Canceling ACAs was thus a smart move by Biden, even if they were not really in effect at the time.

However, in August, Biden’s Department of Homeland Security started flying people from Central America to southern Mexico under Title 42. From there, they were bussed to the border with Guatemala and dumped by Mexico’s immigration agency, INM, to make their way into Guatemala, or across Guatemala. Some, of course, simply turned around and headed north again after a brief pause because going home was still not an option.

As a result of these flights, Biden has summarily expelled far more people on planes to southern Mexico, and from there into or through Guatemala, than were ever removed under the ACA negotiated with Guatemala in 2019. The effect is thus largely the same - expelling Central American refugees to a third country, but with the important caveat that there is no official process in place for Guatemala (or Mexico for that matter) to receive these people as refugees or asylum seekers. Indeed, Guatemala has pushed back against receiving non-Guatemalan nationals because Mexico and US immigration agencies have been leaving them at remote ports of entry in and near the Lacandon forest where there are few services available.

Even more Trumpish is the Biden administration’s additional pressure on Mexico to expand its role as the United States’ junior partner in immigration enforcement. Trump threatened tariffs, Biden has blackmailed with AstraZeneca vaccines, but in the end the demands on Mexico have remained the same: Keep immigrants away from the US border.

Obviously Mexico has a limited capacity to do this, but they have tried. The result is further militarization of Mexico’s border with Guatemala, which was closed to non-essential travel in April. Limitations on migrant movement have meant that people, particularly from Haiti, Cuba, and Venezuela (the people primarily stuck under the Del Rio bridge right now) have been stuck in Chiapas for months. In some cases, for years. Why? If they have applied for asylum they are not permitted to leave the state they enter - for most that is Chiapas or Tabasco. The agency that makes these decisions (COMAR) is required by law to respond to asylum applications within 45 days. They are very far behind.

Unable to leave the state, and unable to find work in Tapachula while waiting for COMAR to decide their fates, people frustrated by these obstacles launched a series of caravans in August and early September, some with the goal of reaching Mexico City in order to press COMAR to make decisions. The caravans were brutally attacked by INM and Mexico’s national guard and then forced back into Tapachula (Chiapas). Summary expulsions of people, many with legal status as refugee or asylum applicants has also taken place.

The result of attacking the caravans has been, predictably, that people have simply sought other unauthorized means to leave Chiapas, some to make their way to the United States. It is no accident that the increase in border crossings at Del Rio is taking place 2-3 weeks following the crackdown in Chiapas. People’s desperation outweighs our cruelty. All Biden and Obrador have done with these policies is to make it more dangerous for people to move - they have not stopped them.

In the end, what runs as a consistent theme of US immigration for the last 40 years, the period covering the development of current enforcement and detention institutions, is deterrence. The logic of deterrence is that if you treat migrants, including refugees and asylum seekers, in the most inhumane ways imaginable, others will take note and stop coming. Biden is as much a believer in (and implementer of) this approach as Trump.

Look at the images from Del Rio and note that after 40 years, the one thing that is abundantly clear is that deterrence does not work as a means to sustainably reduce migration. All it does achieve is the goal of wrecking people’s lives. That policy makers know this and keep doing it anyway, is truly evil.

If this sounds like hyperbole, consider that as I am writing this, Biden is seeking a private contractor to run an immigrant detention facility at Guantanamo Bay - with the requirement that some guards speak Haitian creole. Not content to double down on the worst policy of the Trump administration, Biden is prepared to add into the mix one of the worst policies of the Clinton administration - detention of Haitian refugees at GITMO - a reminder that the current immigration horror show is a bi-partisan affair. There is no “lesser evil'.' The whole system stinks.

To paraphrase George Bernard Shaw misquoting Hegel: “What we learn from history is that people learn nothing from history.”

What can we do? For now, we keep up the pressure 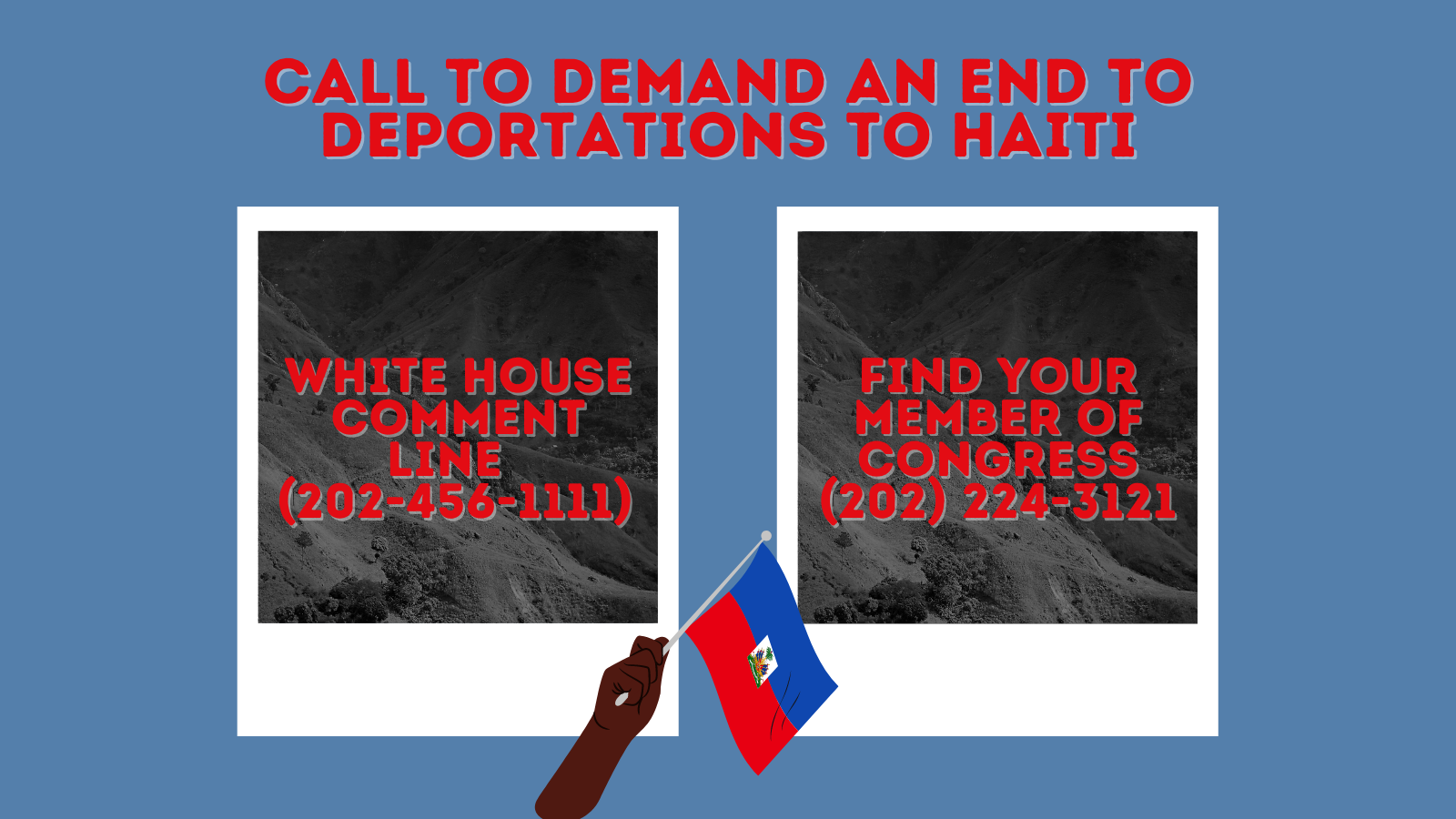