Biden has expelled nearly as many Haitians in 12 months (20,200+) as were deported during the previous 20 years (22,000-23,000)*** under three different presidents. Indeed, Biden’s administration has likely expelled far more: In addition to these official removal numbers, another estimated 8,000 Haitians were expelled back into Mexico in September of 2021, voluntarily according to DHS Secretary Mayorkas, but in circumstances that make that characterization suspect. 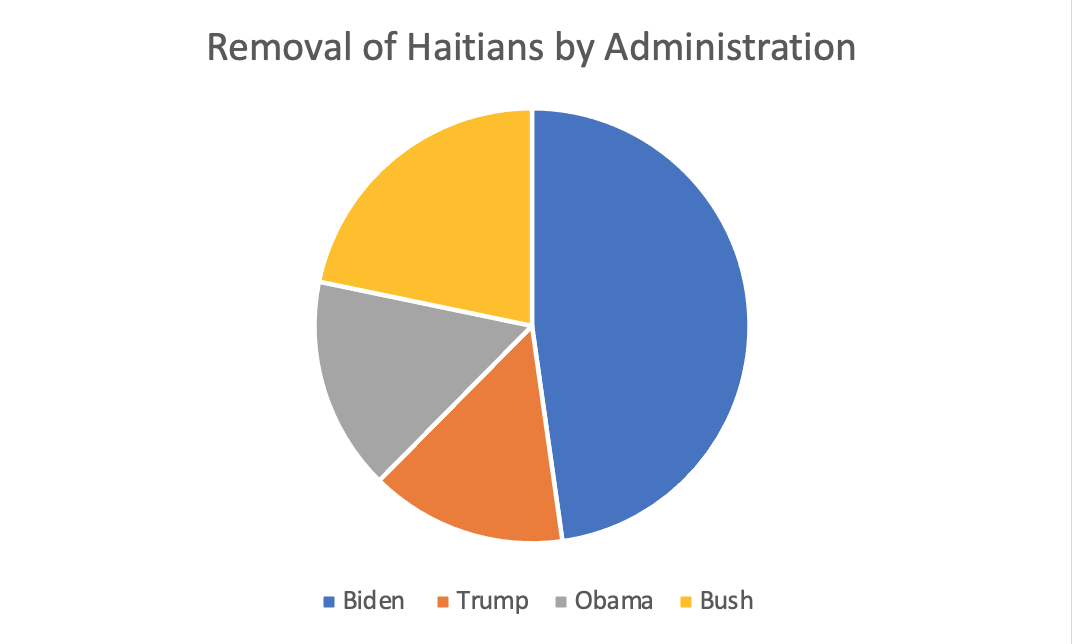 Through the end of January 2022, the Biden administration expelled 19,189 Haitians via flights to Port au Prince and Cap Haitien according to the International Organization on Migration. There have been an additional eleven flights from February 1st to February 21th - bringing the estimated total number of people expelled to 20,200 and growing. For regular reporting on flights, see Witness at the Border.

Another 8,000 Haitians “volunteered” to return back to Mexico in September of 2021 according to Department of Homeland Security Secretary Mayorkas, speaking during a press conference about the situation in the Del Rio sector. The degree to which people voluntarily went back into Mexico must be weighed against what they were facing - certain detention and deportation to Haiti. In addition, the entire fiasco that occurred at the Del Rio crossing was an abomination of human rights violations. There has been an internal DHS investigation into Border Patrol attacks on Haitian migrants and a lawsuit brought by the Haitian Bridge Alliance and other organizations concerning the overall poor treatment of Haitians by US immigration authorities in Del Rio.

The Trump administration expelled **6,691 Haitians. Just over 2,800 of those removals occurred early in 2017, following the Obama administration’s decision to expand deportations to Haiti in October of 2016. Indeed, of the 5,567 Haitians expelled in FY 2017, 2,737 were expelled by the Obama administration between October 2016 to January 2017. Most of the rest expelled that year occurred in February to April, and more accurately reflect an Obama policy. Trump announced his intention to suspend Temporary Protected Status for Haiti in late 2017 - but that suspension was tied up in courts throughout his presidency.

The Obama administration expelled *6,758 Haitians over an 8 year period. As noted above 40% of those removals occurred in the first 4 months of FY 2017. Temporary Protected Status was re-designated for Haiti by the Obama administration in 2011 - a year after the massive earthquake that wrecked Port au Prince in January of 2010. Despite TPS being in place and the country in shambles, deportations continued for new arrivals and so called “criminal deportees” who did not qualify for TPS. The deportations were condemned by the United Nations and others. A detailed report on these removals was published in 2015 jointly by the law clinics at the Universities of Miami and Chicago.

In 2016 the massive increase in deportations was the result of an increase in arrivals of Haitians near San Diego, and was intended then (as today) as a deterrent. The Haitians arriving in San Diego were mostly leaving Brazil where many had relocated after the 2010 earthquake. From 2010 to 2015 Brazil admitted tens of thousands of Haitians in a drive for workers to help prepare for the Olympics and World Cup. Starting in 2015, Brazil fell into a recession, and the situation for Haitians deteriorated quickly. Many tried to come to the United States in 2015 and 2016. They were mostly blocked at the border, as the Obama administration instituted its “metering” system, which forced Haitians to wait in Mexico for their number to be called. Some are still waiting. 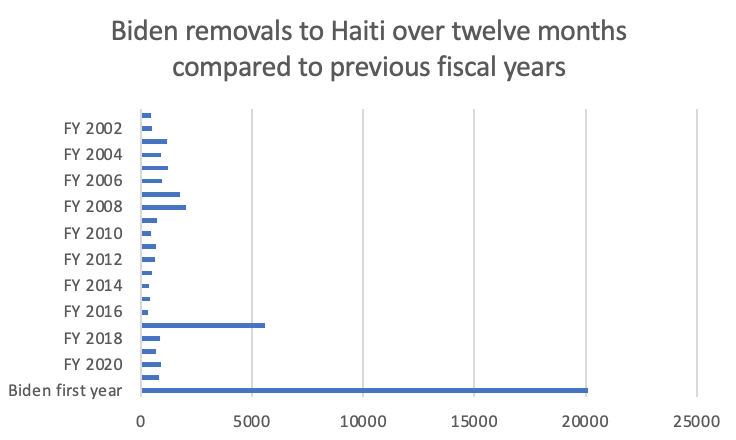 The Bush administration deported 9,100 Haitians - during a time that included an increase in removals following the 9/11/2001 attacks and an increase in border militarization more generally. The Bush years also covered the 2004 coup d’etat in Haiti, following which the US Coast Guard interdicted and returned hundreds of Haitians caught at sea - though nothing like the number that had been interdicted in the 1990s. Those numbers are not included here or in any other year, as the people interdicted in this manner rarely make it to the United States.

We need to tell Biden to halt the expulsion of Haitians. At least 85% of these expulsions have taken place using Title 42 policies - a faux public health order issued under the Trump Administration permitting the Department of Homeland Security to expel people without any possibility of asylum screening. So, not only has Biden removed far more Haitians, but he has shut many out of the possibility to apply for asylum in the process and at a time of great distress in Haiti.

This week members of the House and Senate called on the administration to halt the removals, writing:

Haiti is in the midst of a deteriorating political, climate, and economic crisis. In fact, Haitians now face the compounding challenge of increasing food insecurity, malnutrition, waterborne disease epidemics, and high vulnerability to natural hazards, all of which have been exacerbated by the COVID-19 pandemic. ... Haiti simply cannot safely accept the repatriation of its nationals, which is why we are so deeply concerned with the large-scale removals and expulsions of individuals back to Haiti. To that end, we are concerned that the Administration’s use of the Title 42 authority is depriving legitimate asylum seekers the opportunity to pursue their claims, contrary to our obligations under international and domestic law.

See who signed the letter - and thank your Representative and/or Senator if they did!

We need to keep up the pressure: the message is halt all removals to Haiti given the current humanitarian crisis, and end Title 42 expulsion for everyone!

Send a message to Congress asking them to speak out against this policy by clicking here.

There have been a few questions about the numbers reported which I address in these notes:

*Figures updated on February 22 to more accurately reflect the period of transition between the ending FY 2016 and Trump taking office in late January 2017 - a period where removals to Haiti reached their previous high.
** For FY 2020 the Department of Homeland Security reported 895 removals to Haiti. 490 of those removals come before the March 20th implementation of Title 42. From March 20th to end of September, DHS is not clear if removal figures include Title 42 expulsions. Which is to say, it is possible that there were more 405 removals during the remainder of the year. Based on Title 42 apprehensions and tracking of likely deportation flights, there may be up to 500 more people removed under Trump than captured in this estimate.

***A final note on numbers: The Transactional Records Access Clearinghouse documents 19,727 ICE removals for Haiti from October 2002 to March 2020. In FY 2001- and 2002 there were 941 removals under INS. That is a total of 20,688 deportation to Haiti from October 2000 through March 2020. The only real questions concerns the figures from March 2020 to January 19, 2021 because 1.) the FY 2021 DHS annual report has yet to be released, and 2.) because of the lack of clarity concerning whether Title 42 is included in the DHS removal figures that year. Therefor, the overall original estimate of 21,900 removals for Bush, Obama and Trump combined should more accurately be reported as a range 22,000 to 23,000 because of the possibility of some undercounting.

However, none of this changes the overall conclusion that the Biden administration has removed far more Haitians than the last three presidents, and is fast approaching their combined total.

As of February 21, Biden has expelled at least 20,200 Haitians back to Haiti since taking office.

Joe Biden in many ways is Trump/Bush Sr. and Jr. lite. Just below the surface there lies an angry man who is capABLE OF ANYTHING TO SAVE HIS STANDING AND PARY CRONNIES WHO SERVE THEIR MILITARY/INDUSTRIAL LOBBYISTS

Mr. Biden-President:
please put your foot down and insist that your officials
who are responsible for immigration issues, please stop deporting Haitians who so desperately need asylum and an oppurtunity to provide for family. From earthquakes, floods, and nonfunctioning Government they desperately need some respite and an opportunity to share their talents and gifts. Thank you.

[…] measure while it is tied up in legal challenges, expelling more than twenty-six thousand Haitians—more than the total number deported by the previous three Administrations combined. Among those deported are […]