A Franciscan Family Response to Eta and Iota: Psychosocial Intervention in Shelters

In December, the Quixote Center delivered funding to one of our partners in the Franciscan Network on Migration for a project called “Psychosocial Intervention in Shelters: A Response to Eta and Iota.”

To understand how this work addresses and supports migrants, it is important to take a step back and consider factors that drive mass migration. The immediate causes of migration are varied, but weather and other disasters have driven many large-scale migrations. Hurricane Mitch is well known to the friends of the Quixote Center, given the massive impact it had in Nicaragua. Neighboring Honduras experienced dramatic upheaval as well. Within the country, a study published six year later showed that more than 90% of the working-age population was living in a municipality different from the one in which they had been born. More than 80,000 Hondurans who sought safety abroad have been granted Temporary Protected Status in the United States since Mitch.

When hurricanes Eta and Iota swept through Central America in November 2020, the effects were likewise devastating and Honduras was flooded in several regions. Many displaced families ended up in congregate settings such as shelters and the effects of such trauma in childhood can be especially serious. While immediate physical needs were being met, there were also attending risks of both unaddressed emotional trauma and further victimization that frequently target vulnerable populations.

Raquel Rodas, a Honduran leader in the Franciscan Network and a trained psychologist, worked together with a team to elaborate a project to address and mitigate some of these risks. Recruiting and training advanced undergraduate students in psychology from the National Autonomous University of Honduras, there were two key elements: 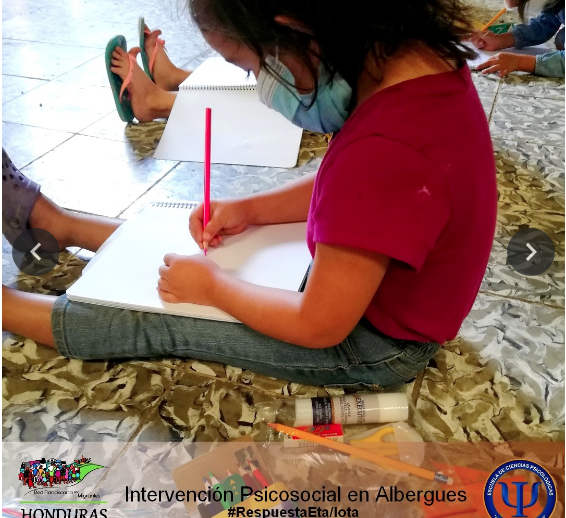 Check out the project’s “Transparency Portal” to see a photo gallery and additional documentation and video testimonials in Spanish.

Click here to support the Franciscan Network on Migration to make future projects and initiatives possible.