Although pandemic precautions have not permitted Quixote Center staff to visit our Haitian counterparts this year, we have kept in regular touch with our partners via virtual meetings twice a month. Because of those close connections, we were able to broadcast the need for increasing deposits in the seed bank and many of you truly delivered to meet this need. We received the report below yesterday and wanted to share some highlights with you.

During the week of November 30, the agronomy team from the Jean Marie Vincent Formation Center visited the gardens of those who received seeds during the 2020 agricultural campaign. The campaign aimed at expanding support from the seed bank to farmers in advance of the planting season. There was, and remains, tremendous concern about food insecurity in the area due to climate change, and complicated by price fluctuations for inputs and transportation. The seed bank is able to bulk purchase seeds and provide them at a low, subsidized cost, to farmers. The program also includes training on preparing sweet potatoes for planting that are resistant to weevils - a pest that has destroyed harvests over the last three years. The team at the Jean Marie Vincent Formation has led the way in adapting to this problem.

As part of the evaluation, everyone who planted sweet potatoes received a visit, plus 4 or 5 other planters in the zones of Ti David, Koraiy, Janpyè, Veney, and Ravin Olyadnn. One of the planters from Ravin Olyadnn is pictured below inspecting her plants. 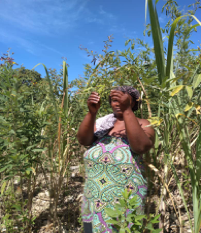 The goal was to see how the planters are faring in the fight against the sweet potato weevil and to offer them encouragement and accompaniment for all of their garden activities. Aneus, who shares responsibility for the seed bank along with Songé, completed the garden visits and provided information for this report.

These notes are continued from an initial visit that was made to each of these gardens just after they had planted the seeds they received from the seed bank. From the time of the initial planting until now, the gardens look very green. For those who planted peas, they are growing well despite the fact that they received a lot of sun during their planting cycle. This is giving the pea planters hope, in the same way that the black bean planters have hope in certain areas.

In the four zones that were visited this week, we noticed the same thing, that people are managing to grow beans and peas in their gardens and have already started eating from the crop that they are producing. These planters have hope for the future, and they are already assured that they will have a portion of their garden harvest to feed their families.

Another thing we noted is that there are some areas, like Rivyè Blanch, where farmers are battling against new pests. In this area, cochineal insects are attacking the peas and the peanuts that the farmers planted. This is causing a lot of stress for the planters, because it puts the future of these crops, which are very important for the peasant farmers, in doubt. We have begun formations to teach the planters how they can fight against this pest, and also how to prevent the cochineal from attacking their future crops.

The beneficiaries report that they are satisfied overall with the accompaniment provided by the agronomy team. They are thankful that the support of the Jean Marie Vincent Formation Center has enabled them to plant more gardens.